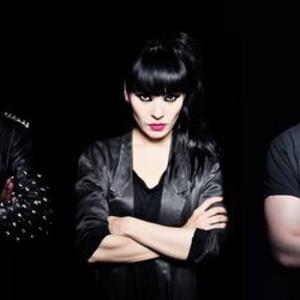 Atari Teenage Riot is a German digital hardcore group formed in Berlin in 1992. Highly political, they fused left-wing anarchist anti-fascist views with punk vocals and the newly emerging techno sound that was called digital hardcore, which is a term Alec Empire later used in the name of his record company. According to Empire, "Digital Hardcore initially meant the final questioning of everything, of the whole. The next step was a shorter one.

According to Empire, "Digital Hardcore initially meant the final questioning of everything, of the whole. The next step was a shorter one. The absolute negation, even to answer one's own existence with a "No". If "No" is true, then suicide can be as much as an event as pressing the buttons on your remote control." (MEAN Magazine, July 1999)

The group was founded as an attack on the increasingly neo-Nazi influenced German techno scene and consisted of three Berliners - Alec Empire, Hanin Elias and MC Carl Crack. ATR's early releases (which included songs like "Hetzjagd Auf Nazis!" / "Hunt Down the Nazis!") were surrounded by controversy in Germany due to the prevailing "no politics on the dance floor" attitude.

After signing to Phonogram, a major European label, in 1993 the band received an unusually large financial advance which they duplicitously used to set up their own record label: Digital Hardcore Recordings or DHR. ATR never delivered a commercially viable demo to Phonogram.

In 1997 ATR was joined by Nic Endo, a Japanese-American noise/soundscape artist during the Beck tour.

In 1999 ATR released 60 Second Wipe Out, an album that phased out all use of sampling and brought on board New York City rappers The Arsonists. According to Magnet Magazine, "Empire's guitar-playing values speed-thrash malevolence, and when paired with Endo's painful skronkage, the album is decidedly denser than its predecessor."

The group decided to effectively disband in 2000 and to not consider the band's future until 2003. Carl Crack died a few months later of a drug overdose. His death caused Empire some anguish and made any reformation less likely. Since the collapse of ATR the surviving members have all pursued separate and successful careers. Nic Endo and Empire have collaborated since but relations between Elias and Empire appear to remain strained despite their mutual business interests. This is because, as she states in interviews, Hanin Elias decided to set up her own record label, where she did not feel oppressed by the mostly male artists. Her record label is named Fatal Recordings.

In March 2002, ATR's album Future of War (1997) was banned in Germany. According to Alec Empire, Future of War was noteworthy because of its "left-rooted critique of the 'modern' high-tech-war, as we had seen it all some years previously during the Gulf War."

ATR reformed in 2010 with CX Kidtronik joining the line-up for live dates and a single Activate! scheduled for release in May.