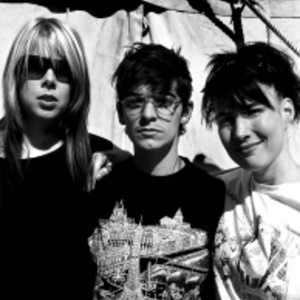 JD had previously worked with the band as the roadie and operator of the slide show created by Sadie Benning for Le Tigre's live performances of the first record. The self-proclaimed underground electro-feminist performance artists combined visuals, music, and dance into their performances.

The song "Hot Topic" on Le Tigre's self-titled d?but pays tribute to dozens of visual artists, musicians, writers, feminists and others who have inspired them. Among the honor?es are: Yoko Ono, Aretha Franklin, Vaginal Creme Davis, Yayoi Kusama, Sleater-Kinney, Billy Tipton, James Baldwin and Jean Genet. In a similar fashion the song "FYR" off the album Feminist Sweepstakes is a tribute to the chapter and ideals put forth in Shulamith Firestone's Fifty Years of Ridicule in her 1970 feminist work The Dialectic of Sex.

The first two recordings by the band were released on the independent label Mr. Lady Records, run by Kaia Wilson of The Butchies and artist Tammy Rae Carland. Feminist Sweepstakes (2001) came out on Chicks On Speed's record label. The album This Island (2004) was Le Tigre's first on a major label (Universal/Strummer). Ric Ocasek of The Cars produced one track, "Tell You Now."
Even after signing with Universal, Le Tigre has continued to work with independent labels. In 2005 they released This Island Remixes with Chicks on Speed.

In 2005 Le Tigre performed at the Michigan Women's Music Festival. The festival has been criticised for its women-born-women admittance policy, which prohibits transgender women from attending.

Le Tigre licensed two of their songs for use in advertisements by a Canadian telephone provider, Telus, and an Australian jewellery chain, Goldmark. A sample from "Deceptacon" plays in the background of a 2006 television commercial for Nivea cosmetics and is also used in the Norwayan movie Reprise by director Joachiem Trier.

In the second half of 2006, the band decided to take an extended break starting early 2007.
Kathleen had now confirmed that the band did split up in 2005.
Since then Kathleen has participated in The Willie Mae Rock Camp for Girls and taught an art class at NYU. JD Samson has toured as keyboard player with Peaches and made many DJ appearances, while Johanna Fateman has kept busy with a hairdressing salon in NYC's Greenwich Village. In 2008 JD and Johanna formed a new project, MEN, that will do a DJ tour and record.

The movie "Who took the bomb ? Le Tigre on Tour" (about 04'05' tours) is realeased in 2010.
As for Hanna, when asked in 2011 why Le Tigre broke up in 2005, she refused to answer, saying all will be revealed in another documentary about her life, being filmed now.. She added that she has resurrected her '90s project Julie Ruin and will be recording under that name soon."

From the Desk of Mr. Lady