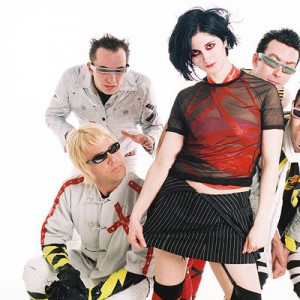 The Epoxies were a DIY punk rock and new wave band formed in Portland, Oregon in 2000. They were known for using homemade costumes and effects during their live shows. The original lineup consisted of Roxy Epoxy (vocals), Fritz M. Static (keyboards), Viz Spectrum (guitar), Kid Polymer (bass), Dr. Grip (drums). After their fist album Kid Polymer and Dr. Grip left the band and were replaced by Shock Diode and Ray Cathode respectively.

In late 2007 the band decided to take a break, and Roxy Epoxy has since confirmed that the band is no longer active. Roxy Epoxy's new band is Roxy Epoxy And The Rebound.