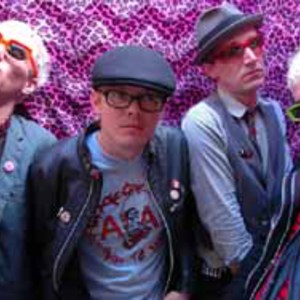 The Briefs are a punk rock band originally consisting of Daniel J. Travanti (guitar/vocals), Steve E. Nix (guitar/vocals), Lance Romance (bass/vocals) and Chris Brief (drums/vocals). The group was formed in 2000 in Seattle, Washington. They play punk music common to the Pacific Northwest independent punk / new wave scene, influenced by acts such as The Buzzcocks, The Undertones and The Adverts. They released their first full length, Hit After Hit, in October 2000 via Dirtnap Records.

The band was courted by and reportedly signed with major label Interscope Records following the release of 2002's Off The Charts, but the deal fell through. The Briefs surfaced on California's BYO Records with the release of 2004's Sex Objects and the reissue of their Dirtnap-era full lengths. They most recently released Steal Yer Heart in 2005. The Briefs have released a prolific number of 7" singles in their career for a number of small independent labels.

In 2004, the Briefs went on European tour without Lance Romance, who had stayed behind to get his GED. They took in his place bassist Steve Kicks of Vancouver's New Town Animals. Lance rejoined the line-up for the 2004 release party of Sex Objects, however retired from the band in 2005. Kicks has since become a permanent addition and was a full member for the follow up Steal Yer Heart.

Lyrically the Briefs have carried on many themes prevalent in '77 era punk rock. The Sex Objects single "Orange Alert" gained notoriety as a seething criticism of the Bush administration and the of the culture of fear in post-9/11 America. It is one of a number of songs critical of the U.S. Government, including "No More Presidents" and "Destroy The USA" from Sex Objects, and "We Americans" from Off the Charts. The band has written a number of love songs a consciously off kilter style similar to the Buzzcocks' "Orgasm Addict." Through songs like "Dolly Parton" the band has also shown a penchant for light-hearted absurdity.

The Briefs are currently on hiatus while Chris is in Germany and Daniel continues his quest towards becoming the world's littlest astronaut, training at a secret location underground, possibly in California. Nix and Kicks are both in a new band called Steve E. Nix and The Cute Lepers. They play a very similar style of music as The Briefs with some added power pop drive. They have released a 7" single for the songs "Terminal Boredom" backed with "Prove It" on 1-2-3-4 Go! Records. Two more singles are due on the europeon labels NFT and Drunk'n'Roll records.