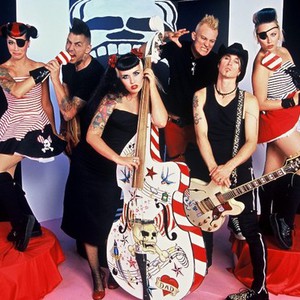 Band founders Patricia Day and Kim Nekroman first met when Day's now-defunct band, the punk rock group Peanut Pump Gun, opened for Nekroman's psychobilly band, Nekromantix, at a festival in Cologne, Germany in 1996. Despite both belonging to the subculture scene of Copenhagen, Denmark, the two had never met before, but they became friends over their mutual interest in alternative music. The two would eventually marry.

Day and Nekroman decided to form a band where they could experiment with many genres outside of their normal bands, and decided to start by switching instruments. Nekroman taught Day how to play an upright bass, while she taught him how to play guitar. The two began auditioning for a drummer, with Nekromantix guitarist Peter Sandorff even being a possible choice. They eventually chose Niedermeier to drum, a friend of Day's and a member of the punk band Strawberry Slaughterhouse, and officially started HorrorPops in 1998. After touring for a while as a trio, the band recruited Niedermeier's old bandmate, Caz the Clash, as a second guitarist.

In 2000, Day recruited two friends, Mille and Kamilla, co-workers at the body piercing shop she worked at to act as go-go dancers for the band's live show. The group also recorded a 7 song demo for use in a press kit, but it was somehow leaked to the public, and resulted in two of the group's singles becoming club hits in Denmark. The group spent the next few years touring Europe, until 2003, when they began recording 6 more demo tracks. During this time, Caz the Clash became a father and left the band to focus on parenting. He was replaced by another Strawberry Slaughterhouse member, Karsten. Hellcat Records, Tim Armstrong's (of Rancid) record label, decided to sign HorrorPops based on their demos. The band was able to release a vinyl single in September 2003, and began a U.S. headlining tour.

The band's first full-length album, Hell Yeah!, was released in February 2004, but problems with getting work visas resulted in the band having to cancel U.S. tour dates. The band was able to make up for this loss via an opening stint for The Offspring in Europe. Mille left the band a short while later to go back to school, and was replaced with Naomi. The band soon relocated from Denmark to Los Angeles, California, resulting in Karsten departing the band to stay in Denmark with his wife. He was soon replaced with Kamilla's husband, Geoff Kresge, who had recently departed from the psychobilly band Tiger Army.