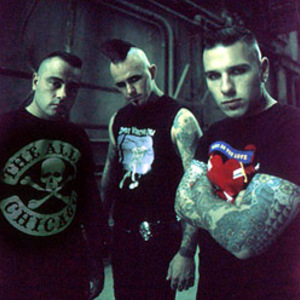 Tiger Army is a psychobilly band from California. They have a very devoted following, as evidenced by the hundreds of photos of Tiger Army-related tattoos that can be found on the band's MySpace page and website. Their fourth album Music From Regions Beyond spawned the band's first radio single, ?Forever Fades Away,? which went to #1 on L.A.'s influential KROQ FM. The video for the track was seen on MTV2 and Fuse TV.

Tiger Army played their first show in 1996 at the Bay Area's legendary punk collective, 924 Gilman Street, known as the venue where everyone from Green Day to Rancid got their start. The gig saw them opening for AFI, who lent Nick 13 their drummer, Adam Carson. Rancid's Tim Armstrong took notice of Nick 13's songs via a series of demos (later collected as The Early Years EP) and signed Tiger Army to his Hellcat Records imprint strictly on the strength of Nick's songs and vision knowing full well he had yet to secure a steady lineup. The first Tiger Army album followed in late 1999.

The fledgling psychobilly scene in North America took flight shortly thereafter. Songs like ?Nocturnal? and ?True Romance? presaged the dark palette that would paint much of underground music in the coming year. Geoff Kresge (ex-AFI) came onboard on stand-up after the first album's release. Now based in Los Angeles, Tiger Army embarked upon eighteen months of touring in support of II: Power of Moonlite, including trips to Europe and Japan and sharing stages with Dropkick Murphys, Reverend Horton Head and The Damned.

Two sold-out record release shows at the House Of Blues on the Sunset Strip marked the June, 2004 arrival of III: Ghost Tigers Rise as the band took off for a month on the main stage of the Vans Warped Tour. After Warped, Jeff Roffredo (the former bass player for seminal West Coast psychos Cosmic Voodoo who had nearly joined Tiger Army before the first album) came into Tiger Army following Kresge's amicable departure, along with drummer James Meza. 46 shows with Social Distortion followed.

The Dark Romance Tour came later, after which the band took some time off to prepare Music From Regions Beyond, pausing briefly for gigs with Morrissey and AFI as well as a headlining performance at Orange County's annual ?Hootenanny? festival and a trip to the legendary Red Rocks Amphitheatre in Denver to support Social Distortion, among other shows. During this period Nick 13 made a cameo appearance in ?Inland Empire,? the latest film from legendary director David Lynch (?Twin Peaks,? ?Mulholland Drive?). The band played a ?MySpace Secret Show? around the release, a sold-out release show at the House Of Blues in Las Vegas and returned to the Vans Warped Tour as a headliner shortly before starting their own ?Razor's Kiss? US tour, which culminated with two sold-out nights at the Wiltern in Los Angeles.

Standup bass player Geoff Kresge returned to Tiger Army at the start of 2008 as the band geared up for their busiest year yet, headlining tours all around the world. They launched the Octoberflame event as well, headlining five nights at the Grove of Anaheim in 2008, two night at the Grove and two at the Wiltern in Los Angeles in 2009, and will return for Octoberflame III.

Tiger Army remains Nick 13's vision and mission, with the new material representing his most fully realized songwriting yet.

Music From Regions Beyond