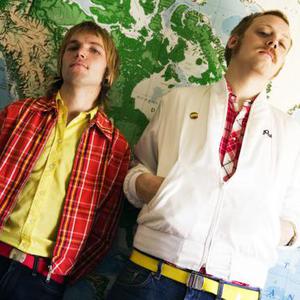 Junior Senior formed in 1998 in Jutland, Denmark when Senior (b. Jeppe Laursen December 25, 1977) and Junior (b. Jesper Mortensen Feburary 7, 1979) got back together after their previous band, entitled Ludo X/Ludox, broke up in 1995. Both Junior and Senior grew up in Jutland. The band signed a deal with Danish label Crunchy Frog Records. The band released their debut album "D-D-Don't Stop The Beat" in 2003.

The band released their debut album "D-D-Don't Stop The Beat" in 2003. The first single, "Move Your Feet", was one of the most played songs on Danish radio and eventually climbed the charts in over thirteen countries, including Australia, France, the UK and Denmark. The single is also available on the soundtrack of the popular American television show Queer Eye for the Straight Guy. Additionally, it has also been included in the US version of the hit dance game DDR Extreme for the Playstation 2. It is often associated with its pixelated music video, created by the art collective Shynola, which is seen in the VH1 commercial for "I Love the 90's: Part Deux" and in the background of its Dance Dance Revolution: DDR Extreme dance.

The follow up single, "Rhythm Bandits", made the singles charts in the UK and Australia, and was included in the soundtrack of the game FIFA 2004.

D-D-Don't Stop The Beat was included in several publications' "Best Albums of 2003" lists, including Rolling Stone, NME, Entertainment Weekly and Blender. The Sunday Chronicle in San Francisco rated "Move Your Feet" as the single of the year, calling it "the best song ever".

The single "Shake Your Coconuts" is available on the Looney Tunes: Back In Action soundtrack, and is used as the menu music in the game Worms 3D by Team17 Software.

The CD features the video to "Move Your Feet" and a "Making Of" as enhanced content. In the "Making Of," Junior (Jesper Mortensen) was asked how many copies he thought the album would sell and he replied, "three to four hundred".

The song "White Trash" from this album was used in the very popular advertisement for Music Magazine TV show Popworld in the UK. The advert featured the two presenters of the show doing a synchronized dance routine to the song whilst wearing identical outfits.

Junior Senior continued producing feel-good dance-pop by releasing their sophomore album "Hey Hey My My Yo Yo" in August 2005, where it shot to #2 on the charts in Japan. Fans of the 80s band "The B-52's" will recognize Cindy Wilson and Kate Pierson singing on the track "Take My Time".

In 2007 they subsequently released an EP entitled "Say Hello, Wave Goodbye" with eight new tracks, in Denmark. There was a US-only release of "Hey Hey My My Yo Yo" on August 14, 2007 that had this bonus EP included, adding these tracks. The duo split to pursue solo projects in 2008.

Jesper has now formed a new band, MAKE OUT, and Jeppe is pursuing a solo project. Jesper also has a new band I Scream Ice Cream

Can I Get Get Get

Hey Hey My My Yo Yo (Limited Edition)