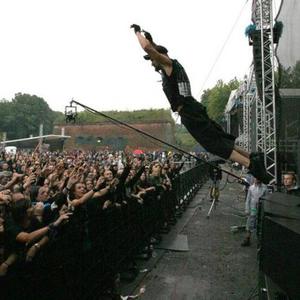 The Berzerker was an extreme metal band from Melbourne, Australia. The band's music, heavily influenced by older death metal and grindcore, can be characterised as a fusion of these with industrial metal, speedcore, and gabba. The band's founding member Luke Kenny describes the band's style as industrial death metal. The Berzerker has produced five full length albums, The Berzerker (2000), Dissimulate (2002), World of Lies (2005), Animosity (2007) and The Reawakening (2008).

The Berzerker has produced five full length albums, The Berzerker (2000), Dissimulate (2002), World of Lies (2005), Animosity (2007) and The Reawakening (2008). These were released through Earache Records, with the exception of the latest album, which was released through Berserker Industries. During the early part of their career as a live act, band members were identified only as The Vocalist, The Guitarist, The Bassist and The Drummer, distinguishable on stage only by the masks they wore. However, the group has since abandoned this device.

A DVD documentary, The Principles and Practices of The Berzerker (2004), includes several hours of live concert footage, as well as the first public images of the band members without their masks.

Most of the band's music videos have been banned from broadcast for reasons such as the possible epileptic fit-inducing imagery contained in the video "Forever", and the horrific imagery of "Reality". The latter features graphic images of cadavers and body parts, along with appearances from the band themselves.