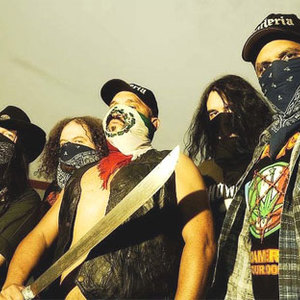 Brujeria is a death metal/grindcore band hailing from Mexico. Their name comes from the Spanish language, meaning "Witchcraft". Their extreme attitude involves the permanent use of urban militia masks, an old custom of refusing to perform live, and performing under pseudonyms to portray themselves as a band of Latino drug lords, and this attitude has been part of their success. Although they have recently performed live at locations across the United States and Latin America, at the very start of their career they were concealing their identities due to being supposedly wanted by the FBI.

Their lyrics, which are entirely in Spanish, focus on anti-Christianity, critique of the U.S. immigration policies, exaltation of figures like the XIX century Mexican revolutionary "Pancho Villa" and the infamous 80's Colombian drug lord "Pablo Escobar" (El patr?n - The Boss). Other recursive subjects in their songs are a libertarian political revolution, parodies involving Catholic saints prostitution, Satanism and "Santer?a", narcotics smuggling, also including performances about killing some U.S. white people (the "gringos").


It would be a mistake to appreciate Brujeria with serious concern, since their embrace of the absurdity of violence in the Mexico/U.S. border socierties follows a tradition of Mexican/chicano political humor with roots in earlier centuries. Since their very start they have confronted ambivalent patterns going from explicit racial hatred and closed Satanism to more mature and realistic points of view. One of their lyrics from the album Raza Odiada "Hatred Race" have changed in time: the first version of Pito Wilson talks about killing white people indiscriminately, while the second version extends the intro and does mention the fact that politics like Pete Wilson stand in racial hatred against Latin people so Latin people must strike back stronger "wet brothers of the U.S. who will fuck you more? It isn't Satan. It is the hatred race of the world [...] Pito (Central American slang for "dick", though the dictionary definition is "whistle") Wilson hate our race[...]". There are too some political contents promoting the Mexican indigenous communist revolution (Zapatistas) and so on.

Brujeria is admittedly a side-project of the founding member and Asesino ("Assassin") stalwart Dino Cazares, featuring artists such as Bill Gould (ex-Faith No More), Nicholas Barker (ex- Cradle of Filth), Raymond Herrera (ex-Fear Factory), Jeff Walker (ex-Carcass), and Shane Embury (Napalm Death). Their lineup has changed over time and would be different at any point.

Dino Cazares and Nick Barker left Brujeria on January 26, 2004. The only remaining members of Brujeria are the two Latino singers, "Juan Brujo" and "Fantasma", as well as Shane Embury. Brujeria has recently resurfaced with two new members and has been touring Latin America. Asesino's band is still going strong, and Asesino himself describes the band as the new Brujeria, because of the claims that Juan Brujo was the reason Brujeria demised. However, the old archaic and rude style of the band is missing into the new Asesino's work which happens to be more commercially focused.

Despite their unconventional career thus far, Brujeria has built a large fan base within the metal underground.

The "new" Brujeria is tentatively scheduled to release their fourth full-length studio album sometime in 2008, though further details are unknown.