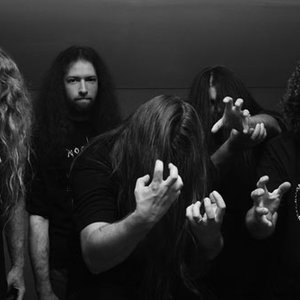 Formed in Buffalo, NY in 1988, Cannibal Corpse helped found, manipulate and transcend the very boundaries of death metal beginning with the scandalously controversial debut, Eaten Back To Life. Raising the eyebrows of inquisitive metal fans and incensed parents and politicians, the record - produced by Scott Burns at the now renowned Morrisound Studios - was more extreme and confrontational than anything the Death Metal genre had ever known.

As a result of the band's gruesome cover art, grisly lyrics and song titles like "Hammer Smashed Face," "Meat Hook Sodomy" and "Addicted to Vaginal Skin," follow-up records Butchered at Birth (1991) and Tomb of the Mutilated (1992) were met with further contempt by the likes of such organized censorship leagues as the PMRC. In just three years, the sale of Cannibal Corpse merchandise was (temporarily) prohibited in Australia, Korea, New Zealand and Germany.

Proving technical dexterity, diabolic vocal grunts and a penchant for serial killers, zombies and gore of all shapes, sizes and textures, Cannibal Corpse won over the hearts of many a metal extremist and have since become a harrowing household name. Since the band's inception they have sold millions of albums world wide and show no sign of slowing or bowing down to the ever changing metal genre. Massive tours throughout the U.S. and Europe as well as Australia and South America only underscored the band's staying power?and all this with zero commercial radio presence and minimal video play (although the band did appear in the Hollywood blockbuster, Ace Ventura - Pet Detective).
After the appearance on the film the band immediately began working on a new album, 1994's "The Bleeding", the album was the only work that had i minor shift in sound incorporating a more Groove metal feeling in the album, but still kept its death feel and deep guttural vocals. That of course was the last full length album to feature Chris Barnes on vocals.

The momentum continued with the 1996 release of Vile, the first Cannibal record to feature former Monstrosity throat George "Corpsegrinder" Fisher following the departure of Chris Barnes and Vile became the first ever death metal record to enter the prestigious Billboard charts. Over the next few years, relentlessly touring, bolstered musicianship and progressively more potent recordings saw the band increase in popularity within the underground and beyond.

After the mass success of 2004's The Wretched Spawn and some personnel changes (longtime guitarist Jack Owen fled the band in 2004 to carry on his commitments with his rock project, Adrift. Origin axe-master Jeremy Turner filled in for the band during their remaining tours that year before Malevolent Creation/Hate Plow/Solstice guitarist Rob Barrett, who played on Cannibal Corpse's infamous releases The Bleeding and Vile records, rejoined the band as a fulltime member.), Cannibal Corpse has returned to the Death Metal frontlines with "Kill".

Simply titled but meticulously assembled, Kill was recorded with producer Erik Rutan (Hate Eternal/ex-Morbid Angel) at Mana Studios in St. Petersburg, Florida. The tenth record of their storied career, each track basks in its own claustrophobic abrasiveness and maniacal subject matter. From the onset of the fiery "The Time To Kill Is Now," guitarists Barrett and Pat O'Brien, vocalist George "Corpsegrinder" Fisher, bassist Alex Webster and drummer Paul Mazurkiewicz pummel with a renewed sense of urgency. Fast, furious and scrupulously timed, the tune is a palpable reminder that Cannibal remains a force to be reckoned with. "Make Them Suffer" sears with an old school Possessed vibe (a band to whom Cannibal has paid homage on several occasions), while "Necrosadistic Warning," replete with a barrage of blistering solo work by O'Brien whose guitar deftness is often underestimated, comes riddled with visions of zombies sexually gratifying themselves with the body parts of the beings they've slain. Other tracks like the telling "Five Nails Through The Neck," "Death Walking Terror," "Brain Removal Device" and instrumental closer "Infinite Misery" see the five-piece at their most cogent, both lyrically and musically.

"Evisceration Plague" was released on February 03, 2009 to the masses of anticipating fans. The album found the band, with what seems to be their strongest lineup, in top form. Producer Erik Rutan handled the production duties once again. "Evisceration Plague" has been generally well-received, cementing Cannibal Corpse's permanent spot as one of the most consistent bands in death metal for more than twenty years.

The band's latest album, "Torture" was released on March 12, 2012, continuing to showcase Cannibal Corpse's hallmark morbidity that has been a running theme in their material.