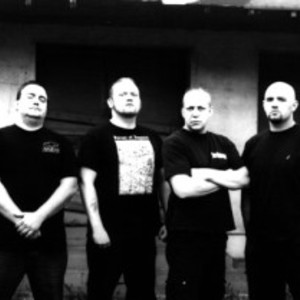 Fleshgrind is a Brutal death metal band from Chicago,USA. In March of 1993, Rich Lipscomb (Guitarist/Vocalist) and Dave Barbolla (Drums) formed to help revive a stagnant death metal scene. Upon recruiting Steve Murray (Guitars) and Casey Ryba (Bass), Fleshgrind was born. In November 1993, they entered the studio to record their now infamous "Holy Pedophile" demo; "Holy Pedophile" earned Fleshgrind a spot amongst the underground, selling over 2500 copies. Their next demo "Sorrow Breeds Hatred...

In March of 1993, Rich Lipscomb (Guitarist/Vocalist) and Dave Barbolla (Drums) formed to help revive a stagnant death metal scene. Upon recruiting Steve Murray (Guitars) and Casey Ryba (Bass), Fleshgrind was born. In November 1993, they entered the studio to record their now infamous "Holy Pedophile" demo; "Holy Pedophile" earned Fleshgrind a spot amongst the underground, selling over 2500 copies. Their next demo "Sorrow Breeds Hatred... Bleed On Me" was recorded in April of 1995 and helped the band secure their first record deal with Pulverizer Records.

The group immediately headed to Quali-Tone Studios with Brian Griffin (Broken Hope, Internal Bleeding) to record "Destined For Defilement", their first full-length album. During the recording process they also enlisted the skills of Ray Vasquez to handle bass duties. This album was released in August of 1997 featuring nine brand-new brutals. Pulverizer Records fell on financial problems, no longer able to press their disc. Fleshgrind decided to take it upon themselves to print their own copies.

Soon after the albums release Vasquez decided to leave the band and Dave Barbolla was asked to leave for personal reasons. The group wasted no time in acquiring new bassist James Genenz and new drummer Alan Collado and promptly proceeded to hit the road. After numerous shows with the likes of Broken Hope, Dying Fetus, Internal Bleeding, Malevolent Creation, Six Feet Under, Deicide, Cannibal Corpse and a five week long US tour with Mortician, the group developed a loyal underground fan base. Refreshed with new members, they began composing new material that was just as catchy as the classic Fleshgrind material, while incorporating more chaotic and technical elements. Due to their relentless self-promotion and rabid underground fanbase they caught the attention of Olympic Recordings, who immediately offered them a deal.

With a bigger labels support, Fleshgrind quickly entered the studio to record their second full length album. In November 2000, "The Seeds Of Abysmal Torment" was released and this the groups most diverse and pummeling release to date. Unfortunately, the band was unable to perform many shows in support of this record, as just before release Rich Lipscomb broke his leg, requiring three surgeries and almost 18 months recovery time. Once he recovered and the band was ready to get back on it's feet, they were hit with another roadblock in May of 2002 when their drummer abruptly left the band.

Fleshgrind soon enlisted former Gorgasm skinsman Derek Hoffman and then began composing new material. In early 2003, the group entered Studio One with producer Chris Djuricic (Origin, Jungle Rot, Novembers Doom) and came out with an album filled with an utter contempt and hatred for everything around them. The new effort, "Murder Without End", is a ten track slab of aggression that will proceed to beat the listener mercilessly with each track that passes by.

Fleshgrind's tours have included US Tours with Mortician, Dead for Days, Canadian mini tour with Suffocation, European tour with Germany's Resurrected and Sweden's Coercion. In 2004 the band was again hit with the unfortunate dilemma of losing a drummer, as Derek decided to split just before touring was to commence. A few months have passed and finally the band is back on it's feet with some new young blood. Fleshgrind welcomes Jesse Kehoe (SCREAMING AFTERBIRTH, FOETOPSY) to the fold as the new drummer. Currently the band are rehearsing songs new and old for shows and festival appearances and also writing new material for the forthcoming album. Having overcome numerous personal issues throughout their career Fleshgrind takes all of that negative energy and turns in into the most volatile death metal there is.

The Seeds of Abysmal Torment