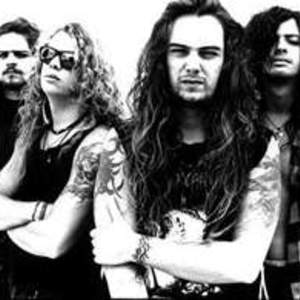 Sepultura is a Brazilian metal band that formed in 1983 in Belo Horizonte, Brazil. The band was a major force in the death metal, thrash metal and ultimately groove metal realms during the late 1980s and early 1990s. Their name means "grave" in Portuguese, which they chose after Max Cavalera, one of the founding members, was translating the lyrics of the Mot&ouml;rhead song "Dancing on Your Grave". Sepultura was formed by Max Cavalera (guitars and vocals), his younger brother Igor Cavalera (drums), Paulo Pinto (bass) and Jairo Guedes (guitars).

Sepultura was formed by Max Cavalera (guitars and vocals), his younger brother Igor Cavalera (drums), Paulo Pinto (bass) and Jairo Guedes (guitars). Sepultura signed to Cogumelo Records after a few years of performing, with a sound influenced by their favorite bands such as Ratos de Por&atilde;o, Discharge, Possessed, GBH and Metallica. Their first EP was Bestial Devastation, a split with Overdose's album on the flipside. Their first LP was Morbid Visions (1986), which included the moderate hit "Troops of Doom" that attracted the band some attention. After Morbid Visions, Jairo Guedes left the band for another death metal venture and Sao Paulo based guitarist Andreas Kisser replaced him. Their second full-length album was Schizophrenia, which was a critical success that led to a contract with Roadrunner Records.

With Roadrunner distributing Schizophrenia worldwide, Sepultura reached new audiences of metal fans, cemented by 1989's Beneath the Remains (1989), which was followed by a long European tour. By the time they released 1991's Arise (1991), Sepultura were located in Phoenix, Arizona and had become one of the most critically-praised metal bands of the 1990s, with Arise going platinum by the end of its supporting tour. Musically, Arise was slightly different from the first three Sepultura albums,slowing down and also experimenting with some groove-laden rhythms. In 1993, Sepultura made the groove hints on Arise into a considerable change in their sound. Changing their original death/thrash style to a more hardcore inspired groove metal sound with Chaos A.D.. 1996's Roots took Sepultura even further from their original sound,the desire to further experiment with the music of Brazil, especially the percussive type played by Salvador, Bahia samba reggae group Olodum. The band further innovated by experimenting with elements from the music of Brazil's indigenous peoples and metal music.

At the height of Sepultura's fame, however, a series of events broke the band apart. Just after the album "Roots" (1996), Sepultura decided to fire their manager, Gloria. Since she was Max's wife, he decided to quit too.

It was rumoured that there was some intra-band tension throughout the latter half of 1996, and at the end of a successful tour of Britain later that year, at Brixton Academy on 16th December 1996, the band told Max they would not renew Gloria's management contract. Max Cavalera left the band, and subsequently formed a new band, Soulfly. The others announced that they would continue under the Sepultura name and were searching for a replacement.

A recording of Max's last show with the band was later released as a live album, 2002's Under A Pale Grey Sky by their former record label Roadrunner Records, against the wishes of the band. Derrick Green from Cleveland and formerly of Outface wound up filling the frontman spot, and the band released Against in 1998. Against was commercially less successful than its two predecessors, as was the follow-up Nation. These releases saw Sepultura move away from their previous approach of the thrash metal sound - a process already in motion in such releases as Roots, and aided by Max's departure - and this led to widespread criticism from the band's original fanbase. Subsequent releases have had a positive effect in returning praise to the band, but opinion is divided on their new direction.

After recording Revolusongs, an EP full of covers in 2002, the band released the album Roorback in 2003, which garnered a lot of positive reviews.

In November 2005 the live Double-DVD and Double-CD Live in S&atilde;o Paulo was released. This was the first official live album from the band.

The release of 'Live In Sao Paulo' marked the first involvement of the new 'Sepularmy' street team in promotion of the bands music. The Sepularmy is unrelated to the bands record label SPV and its members are motivated purely by the desire to share the bands music with as many people as possible. The army is expected to be involved in the promotion of all the bands releases and endeavours for the foreseeable future and anyone is welcome to register and help out.

A new album, called Dante XXI was released on March 14, 2006. It based around Dante's The Divine Comedy. This album has been considered to be the band's best effort with Derrick Green and also carries some thrash influence. Although some areas of the media have criticized the album, fans have received it well.

In a recent interview, Igor stated that the band agreed to retire the Sepultura name at the conclusion of the band's current tour, but bassist Paulo Jr. has denied this report.

In January 2009, Sepultura released A-lex, being the first album without any Cavalera member. It is a new concept album based on the book A Clockwork Orange.

Beneath The Remains (Deluxe Edition) CD2

Beneath The Remains (Deluxe Edition) CD1