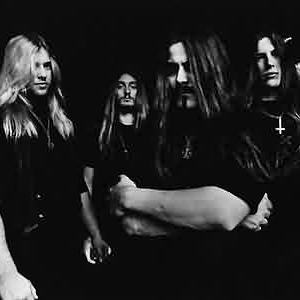 Deicide is an American death metal band formed in 1987. Their first two albums, Deicide and Legion, are ranked second and third place in best-selling death metal albums of the SoundScan era. As Amon (1987-1989) Deicide was formed in Tampa, Florida July 21, 1987, after guitarist Brian Hoffman called Glen Benton, replying to an advertisement the latter had placed in a local music magazine. They are influenced by bands such as Destruction, Sodom, Venom, Bathory, Possessed, Death and Slayer.

Deicide was formed in Tampa, Florida July 21, 1987, after guitarist Brian Hoffman called Glen Benton, replying to an advertisement the latter had placed in a local music magazine. They are influenced by bands such as Destruction, Sodom, Venom, Bathory, Possessed, Death and Slayer. Within days the band, consisting of Benton (bass/vocals), Hoffman, Hoffman's brother Eric (guitars) and Steve Asheim (drums), had been named Amon after the Egyptian deity. Within a month, Amon had recorded crude Feasting the Beast 8-track demo in Benton's garage and had started playing the occasional gig in the Tampa area. In 1989, Amon recorded their second demo, Sacrificial, at Morrisound with producer Scott Burns.

However, before being known as Amon, the band was known as Carnage: "Carnage consisted of 5 members the 2 members were let go. Glen was found in a local music magazine. We had him play bass. And another singer was hired. He could not phrase properly so he was let go. Then we decided have Glen sing. Amon was brought into this world."- Eric Hoffman

Malevolent Creation guitarist Phil Fasciana recalls an early Amon show: "It was like Slayer intensified a thousand times." "I guess Amon had hollowed out a mannequin and filled it with fuckin' blood and guts from a butcher shop... and then they threw the fuckin' thing on the floor. Morbid Angel had these pit bulls with them back then and they were just tearing the meat up. It was a really weird scene, man. There was blood and meat everywhere."

Benton reportedly stormed into Roadrunner Records' A&R man Monte Connors' office and presented him with the demo, saying, "Sign us, you fucking asshole!" The next day contracts were issued to the band. In 1989 the band's name was changed to Deicide at the request of Roadrunner Records, as Amon was the name of the house in the (then fellow Roadrunner artists) King Diamond album "Them".[citation needed] "Deicide" is defined as the act of killing a being of a divine nature, or a symbolic substitute for such a being; a deicide can also be one concerned in putting such a deity to death. "Me and my first wife were visiting family up in Buffalo and we went over to the city with a copy of the demo. Scott Burns had already sent it to Monte, though, and it was actually sitting on his desk. So I walked in and said, "I'm Glen Benton- here's another tape. Don't be an asshole- sign us. I wasn't even back in Buffalo yet when they called in with the contract offer."

Deicide then released their self-titled debut album, also produced by Scott Burns at Morrisound, in 1990. Their debut featured re-recorded versions of all six of the Sacrificial tunes that had secured them their record deal.

Both Eric and Brian tended to play technical solos at fast speeds and with overlapping riffs, which gave Deicide the definitive heavy sound and complex song structures. This lineup remained intact until November 25, 2004 in the wake of increasing animosity between Glen Benton and the Hoffman brothers - allegedly in regards to royalties and publishing.

Shortly after, the guitar roles were then filled by ex-Cannibal Corpse guitarist Jack Owen, and Vital Remains guitarist Dave Suzuki. Following the tour, Suzuki was replaced by Ralph Santolla, formerly of Death, Iced Earth and Sebastian Bach. Santolla stated he is a Catholic and this has received a small amount of shock and ridicule from some metal fans. In spite of this, Deicide's eighth studio album The Stench of Redemption album received rave reviews, and is one of their biggest sellers yet.[citation needed]

On May 24, 2007, it was announced that Ralph Santolla had left Deicide. Subsequently, he joined Florida's Obituary and appears on their album Xecutioner's Return as well as the tour. Then on July 20, 2007 guitarist Jack Owen (ex-Cannibal Corpse) announced that Deicide is "on hiatus" and he has joined Ohio based death/thrash combo Estuary for touring purposes. The band did a Balkan tour, dubbed "Balkans AssassiNation Tour", in October 2007 alongside Krisiun, Incantation and Inactive Messiah.

By November 2007 Deicide began work on its ninth studio album at Florida's Morrisound Studios. Entitled Till Death Do Us Part, the follow-up to 2006's The Stench of Redemption promises to be Deicide's "most savage and aggressive [offering] to date," according to a press release. Drummer Steve Asheim recorded drum tracks and Benton started recording vocals in December. By April 2008 two songs off this album were posted online.

On January 6th, 2009, Deicide posted a blog on their official Myspace page saying that they had signed a worldwide record deal with Century Media, with Ralph Santolla returning to the band for a European tour. It is also said that they are working on material for a summer 2009 release.

In the Minds of Evil

To Hell With God

Till Death Do Us Part

The Stench Of Redemption

Scars Of The Crucifix

In Torment In Hell