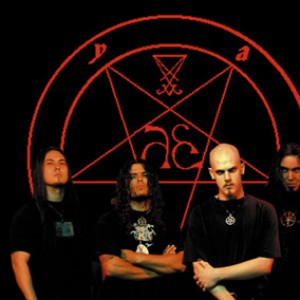 Vital Remains is a blackened death metal band from Rhode Island, USA formed in 1989. Influenced by the likes of Venom, Celtic Frost, Bathory, Mercyful Fate, Sodom and Destruction. Originally comprised of guitarists Paul Flynn and Tony Lazaro, vocalist Jeff Gruslin, bassist Tom Supkow, and drummer Chris Dupont, the group has been through several line-up changes and record labels over the years. A pair of demos (1989's "Reduced to Ashes" and 1990's "Excruciating Pain") led to a contract with French label Thrash Records, who in turn released "The Black Mass" in 1991.

A pair of releases followed from the Peaceville label and released "Let Us Pray" in 1992 and "Into Cold Darkness" in 1995. Before moving to another French heavy metal label, Osmose Records, for the release of "Forever Underground" in 1997 and "Dawn of the Apocalypse" in 2000 which the band consider their heaviest album. Since "Dawn of the Apocalypse" album, the vocals were taken over by Glen Benton (frontman of the band Deicide), in 2001, although the lyrics are still written by the rest of the band. In 2003 the controversal album "Dechristianize" was released, causing protests from many Christian Activists and other critics because of its album art and aggressive 'Anti-Christian' lyrics.

Early 2007 saw the release of "Icons Of Evil" by Century Media, which features a cover that outraged many religious people.

Dawn of the Apocalypse