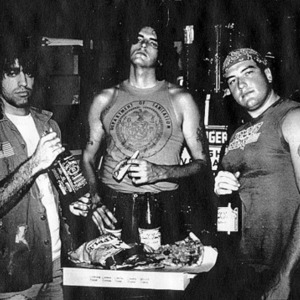 Carnivore was an American crossover thrash metal band formed by Peter Steele (later of Type O Negative fame) out of the ruins of the Brooklyn hard rock group Fallout. They released two albums: "Carnivore" (1985) and "Retaliation" (1987). The band broke up not long thereafter. The first album is more traditionally metal-sounding, drawing inspiration from Black Sabbath and 1970s Judas Priest, while the second has significant hardcore-crossover influence.

Both are fit neatly into the speed-thrash genre, however. The lyrical themes include nihilism, anti-religious sentiment, a mockery of racism, intolerance, and general human stupidity, a heap of cynicism, and explicit tongue-in-cheek depictions of gore and despair. For example, this line from "Ground Zero Brooklyn" sums up the band fairly well: "I shit my pants as I wait for the reaper!". Song titles like "Jesus Hitler", "Race War", and "God is Dead" are also representative.
The first Type O Negative album, "Slow Deep and Hard." was partially composed from material originally written for Carnivore.
Several reunion shows took place over the years. One of the shows was at Wacken Open Air 2006, where they had an 1.25 hour setlist.
Original Carnivore guitarist Keith Alexander died in a biking accident on July 11, 2005.
Peter Steele died April 14, 2010 (aged 48).