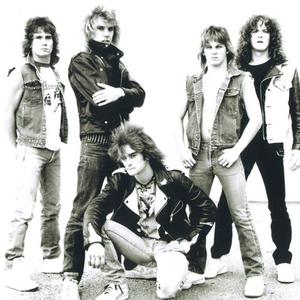 Two artists have recorded under this name: thrash metal band formed in Phoenix, Arizona. Active (as Flotsam and Jetsam) 1983 - Present. Originally named Paradox then Dredlox until Mark Vasquez and LL Cool Kevin Horton joined the band and changed again to Dogz. Bassist Jason Newsted joined in 1982. He came to Phoenix with his band Gangster from Detroit on their way to California they broke apart while in Phoenix. Kelly saw Ak sing at his high school talent show. Singing "The Goodbye Girl". One Summer they were in the same summer school class.

Originally named Paradox then Dredlox until Mark Vasquez and LL Cool Kevin Horton joined the band and changed again to Dogz. Bassist Jason Newsted joined in 1982. He came to Phoenix with his band Gangster from Detroit on their way to California they broke apart while in Phoenix. Kelly saw Ak sing at his high school talent show. Singing "The Goodbye Girl". One Summer they were in the same summer school class. Kelly asked if wanted to try out and it was on. We called him the "2 weeker" since it was his trial period. AK sang Judas Priest better than Rob on his best day back then. Erik A.K. arrival was in 1983. Ed Carlson was to follow in '83. Taken from a local rival band called 'Exodus' (not to be confused with the thrash metal band of 'Bonded by Blood' fame). The band renamed itself Flotsam and Jetsam after writing a song inspired from a chapter of J. R. R. Tolkien's The Two Towers. Hence the unheard song "Flotsam and Jetsam".

The band made its live debuts in local clubs which would allow them eventually to play with bands such as Megadeth, Armored Saint, Alcatraz, Malice, Exciter, Mercyful Fate, Riot, Autograph. Flotsam and Jetsam released two demo tapes in 1985, "Iron Tears" and "Metal Shock". We created our own video Hammerhead from the Metal Shock demo. We taped it in Jason and Ed's apartment living room. From there we made a live video from the infamous Bootlegger in Phoenix. Those combined with the demos enable us to get on Metal Massacre 7 the precursor for the acclaimed release of "Doomsday for the Deceiver". Debut on July 19th, 1986.

After they contributed to the "Speed Metal Hell II" and "Metal Massacre VII" compilations, they got a deal with Metal Blade Records. Then they released their first album "Doomsday for the Deceiver", which was produced by Brian Slagel. Many considered this album as a milestone in the history of thrash metal, although it is speed metal for the most part.

Bassist Jason Newsted, who was also the band's main songwriter on their first album, left the band soon after to join Metallica, replacing their late bassist Cliff Burton. Flotsam and Jetsam had asked another local bassist Phil Rind (Sacred Reich), to fill in Jason's place for a short time. They then acquired Mike Spencer from Sacramento band "Sentinel Beast". The band signed with Metallica's label Elektra Records before touring Europe with Megadeth in 1987.

Mike Spencer lost his position to Troy Gregory in 1988, and in the same year the band's second album "No Place for Disgrace" was released. It is considered as a strong metal effort by many metal fans. It includes a cover of Elton John's hit Saturday Night's Alright for Fighting. The music shifted towards pure thrash metal. The band opened for King Diamond in America. Also toured with Megadeth, Testament and Sanctuary in Europe on the "So Far, So Good. So What" tour.

Fifteen months later, they got a deal with MCA and began to work on their third album "When the Storm Comes Down", which was released in 1990. The band expected to gain recognition with this album, but it suffered from a poor production a weaker songwriting compared to their first two albums. Many fans lost interest in the band at that time.

Troy Gregory left the band shortly after for Prong and the band had to find a new bassist once again, eventually hiring Jason Ward to fill the role. "Cuatro" saw the band change their style mixing thrashy and groove-laden power metal with a modern sound. The album was rather successful, nevertheless. Flotsam and Jetsam made some efforts concerning the promotion: four singles were released and a video was shot for the songs Swatting at Flies and "Wading through the Darkness".

Their fifth album "Drift" was released in 1995, with three singles released off of the record. A long break followed the release of the album.

They returned to their former label Metal Blade Records as they had been dropped again due to the failure of support from MCA and the interest in Metal at that level was weakened by Seattle grunge. Their 1997 album "High" Featured (Fork Boy) Which was a dedication to Jeff Ward, Jason's brother who he lost at the beginning of the Cuatro Tour. Former drummer of such bands as Nine Inch Nails, Ministry, Revolting Cocks and of course Lard The originator of Fork Boy. "High", made a good impression on fans but did not match their early work.

Mike Gilbert and Kelly Smith left the band after "High" and were replaced by guitarist Mark Simpson and drummer Craig Nielsen.

Unnatural Selection was released in 1999 and Mark T. Simpson left the band soon after. He joined the band again in 2000 to record a new album, "My God", considered as their most aggressive work. At that time Erik A.K. had founded a country band, the A.K. Corral. He then left the band, demotivated after spending fifteen years waiting for success. Though Flotsam and Jetsam did not disband, there was a long break at that time. They found a new singer in James Rivera who took over vocal duties live. Later the band felt anyone other than Erik A.K. could be their singer and Rivera left the band soon after.

The live DVD "Live in Phoenix" was released in 2004, containing thirteen songs with Eric A.K.. Not long after, he joined the band again officially and they planned a comeback album. The lyrics for the album were moslty inspired by Eric A.K.'s nightmares. This resulted into a concept album entitled "Dreams of Death" like track 2 of "No Place for Disgrace". The album was released on the Crash Music label. The live DVD Live in Japan was released in February 2006. "Doomsday for the Deceiver" was re-released in November 2006, including their two demos, to celebrate the album's twentieth anniversary.

Flotsam and Jetsam with Driven Music Group, INC in 2008.


Flotsam and Jetsam's "Once In A Deathtime" two-disc DVD/CD set that was recorded and filmed last year in Europe will be reaching North American soil on July 29th via Driven Music Group, Inc.

The package is currently scheduled for a European release on June 16 by Metal Mind Productions.

As previously reported, the material on "Once In A Deathtime" features an extremely intense show the band gave at the Metalmania Festival 2008, offering metalheads everything FLOTSAM AND JETSAM came to be respected for: brutal non-conformist sound, a slaughter of powerful, furious and perfectly executed thrash riffs, as well as excellent song-writing. With a great selection of songs from their discography, also including such classic compositions as "Doomsday For The Deceiver", "No Place for Disgrace", or "I Live You Die", the band treated their fans to one hell of a ride at this genuine thrash metal feast.

Here is the complete track listing:

CD (only on limited DVD+CD edition):

Flotsam and Jetsam are currently in the studio working on their new album which will be released early 2009 through Driven Music Group, INC.

2) A British musical comedy duo of the 1920s-40s. The act partnered B.C. Hilliam, a pianist who also provided the ?Flotsam? part in his high tenor, with Malcolm McEachern, whose deep bass contrasted as the ?Jetsam? portion. The pair mostly recorded humorous, witty or playful tunes in the music hall style of the day, although their repertoire occasionally included social commentary or old favorites of popular song. They are sometimes considered forerunners of Flanders & Swann.

Blood In The Water

The End Of Chaos

No Place For Disgrace (Rerecorded Version)