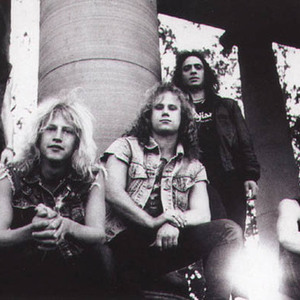 More than one artist shares this name. 1) Heathen is a North American thrash metal band originating from the Bay Area California, founded in 1984 by guitarist Lee Altus and drummer Carl Sacco. They have released two critically acclaimed albums, "Breaking The Silence" (1987) and "Victims Of Deception" (1991). First Era (1984-1992) Heathen was formed in 1984 by two friends, guitarist Lee Altus (who was a native of Ukraine (U.S.S.R. then)) and drummer Carl Sacco (formerly of Metal Church). The pair later recruited lead vocalist Sam Kress and second guitarist Jim Sanguinetti.

1) Heathen is a North American thrash metal band originating from the Bay Area California, founded in 1984 by guitarist Lee Altus and drummer Carl Sacco. They have released two critically acclaimed albums, "Breaking The Silence" (1987) and "Victims Of Deception" (1991).

Heathen was formed in 1984 by two friends, guitarist Lee Altus (who was a native of Ukraine (U.S.S.R. then)) and drummer Carl Sacco (formerly of Metal Church). The pair later recruited lead vocalist Sam Kress and second guitarist Jim Sanguinetti. The band did not have a bass player in their early years, and this would carry on later when the band had notorious amounts of trouble finding a permanent bass player. This first lineup only played one gig in 1985.

Shortly after this first gig Sam Kress and Jim Sanguinetti (the later of which went on to form the funk-thrash combo Mordred) left the group and were replaced by new vocalist David Godfrey (formerly of Blind Illusion) and new guitarist Doug Piercy (formerly of Anvil Chorus and Control). The bands also recruited their first bassist, Eric Wong around the same time. This lineup debuted in early 1986.

Now finally with a stable lineup, the band played many shows around the Bay Area and gained notoriety as an excellent act, their early style largely combined the aggression of thrash metal with the sophistication and melodic vocal style of the New Wave of British Heavy Metal movement. The band was not influenced by punk rock the way many of their peers at the time were, and as a result were more attractive to "true" metalheads and were arguably ahead of their time in that they were much more consciously "metal" than other thrash bands of the time who simply combined NWOBHM and hardcore. Other bands would not come to this stage of development until years later if ever at all.

Heathen's "big break" came when they released the Pray For Death demo, recorded at Doug Piercy's studio. The demos popularity (in addition to the great interest in the thrash metal scene at the time) paid off in 1987 when they got a deal with Combat Records. Shortly after their signing Eric Wong left the band to join Paul Baloff's new project Pirhana (he ended up playing bass on Pirhana's only known recording). Former Griffin guitarist Mike "Yaz" Jastremski came in on bass.

Heathen's debut album Breaking the Silence was released in 1987. The album quickly became a thrash classic. It was very well received critically, who pointed out the album was unique for, as explained early, it's meld of the already existing thrash metal energy and NWOBHM singing and song structures. The album featured one very successful single, a cover of the 1970s glam rock band Sweet's song "Set Me Free". The song got some rock radio airplay and the video received heavy rotation on MTV's Headbanger's Ball. The band embarked on a tour in support of the album.

Following the tour however the bands lineup began to implode. In 1988 Carl Sacco left due to musical differences (apparently Sacco had become more interested in jazz). He was replaced by Darren Minter. Mike Jastremski left the band shortly after this, and the band went through a wide variety of bassist between 1988 and 1991 including one time Blind Illusion bassist Vern McEloy. In 1989 David Godfrey left the band due to personal differences and musical differences (many fans complained that they would prefer Heathen if they had a more aggressive, "thrash" singer). For few months late ex-Exodus vocalist Paul Baloff became the bands vocalist. His tenure only lasted a few weeks before the band realized he wasn't right for their style. They also briefly recruited late Metal Church vocalist David Wayne.

Fortunately in 1990, Godfrey (now using the last name David White, the name of his true father as opposed to his stepfather) returned to Heathen. The band continued to have problem with bass players. Out of desperation they recruited Blind Illusion mainman Marc Biedermann to go into the studio with the band to play bass on their upcoming album.

That album was Victims of Deception, released in 1991 through Roadrunner Records. Victims... was not a dramatic departure from the style of Breaking The Silence as one might expect due to the 4 year gap between album release time. However the album was considerably more technical, featuring odd time signatures, more complex riffs and songs, tempo and key changes and longer song lengths. The album is often tagged as "progressive thrash metal", (arguably started in 1988 by Metallica's ...And Justice for All with its densly packed 65 mins. of music in just 9 tracks) similar to many other thrash albums that came out around this time. Like its predecessor, Victims of Deception was also critically acclaimed. It was not quite as commercially successful as Breaking The Silence' but still sold well and featured a cover of Rainbow's "Kill the King" as well as original ballad "Prisoners of Fate" being released as singles. Both garnered up minor rock radio airplay.

That year the band finally found a permanent bassist in Randy Laire. With this stable lineup the band embarked on the tour and all ran quite well until the untimely death of Laire and his girlfriend in a car accident. The band replaced him with Jason Viebrooks. Doug Piercy departed from the band in 1992 and was replaced by Ira Black. The band planned to record a covers EP dedicated to Laire and his girlfriend as well as White's deceased brother Jeffery. But the band came to a status of a hiatus in 1992.

The concert was a huge success and in 2004, but Mike "Yaz" Jastremski left the band again, been replaced by the Ulysses Syrens bassist Jon Torres releasing a full-length album, the title of which is Recovered, which consists of re-recorded old material and cover songs. A new demo was released in August 2005, which contains three new songs.

In 2005, the band recruited Terry Lauderdale to be the second guitarist and played to packed houses and festivals across England, Scotland, Germany, France, the Netherlands and Belgium. Also in 2005, Lee Altus joined bay area thrash pioneers Exodus, replacing long time guitarist Rick Hunolt in the band. Lee has since recorded two albums with Exodus, Shovel Headed Kill Machine in 2005 and The Atrocity Exhibition... Exhibit A in 2007. Though in a new band that he has devoted himself to, Lee said that his time with Exodus has not and will not affect his performance and status with Heathen.

Heathen played a benifit at Annie's in 2007 the lineup for this was David White, Lee Altus, and Jon Torres along with old members Doug Piercy and Carl Sacco.

In early November 2007, David White put to rest the rumors of a Sacco/Piecy reunion, with the addition of new musicians. The band recruited Prototype guitarist Kragen Lum and well known thrash drummer Mark Hernandez as their replacements. This lineup played some shows throughout 2008 with Hernandez exiting the band and Darren Minter returning to the band. Heathen signed a record deal with Mascot Records in late 2007 and began writing and recording their comeback album "The Evolution Of Chaos", released on King Records in Japan December 2009, Mascot Records Europe January 25, 2010, and the US February 14, 2010.

2) Heathen is / was a hardcore band from Richmond, VA in the USA.
*They have since pluralised their name to 'Heathens'.
Their line-up contains members from the bands Bracewar and Cast Aside.
They have so far released a demo, and a self-titled 7? (under Heathen) and a full length album, 'High Stakes' (under the new name) on the Thrashed! Records label.

Empire Of The Blind