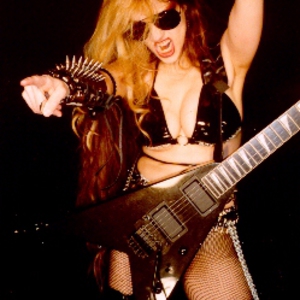 The Great Kat is the stage name of Katherine Thomas, an English-born, Long Island NY raised, musician best known for her thrash metal interpretations of well-known pieces of classical music. Most feature her using the electric guitar, but some have her on violin. Thomas is in fact a classically-trained violinist, graduating from the Juilliard School and touring for a time playing conventional classical music before crossing over to metal.

According to her website, Guitar One magazine listed her as one of the "Ten Fastest Shredders of All Time", and many media reviews of her work have praised the speed and clarity of her playing. Her classical background, technical skills and self-promotion are sometimes compared to Yngwie Malmsteen.

Worship Me Or Die