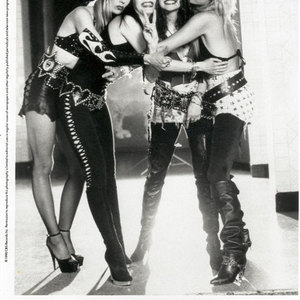 Though the name implied an all-girl group, in fact the band consisted of four female singers backed by an all-male band (the lineup of which isn't entirely clear, though it is known that one of the guitarists was Chris Moffett, later of Warrior Soul, and one-time Overkill guitarist Bobby Gustafson also briefly appeared on the album and toured with the band). With member names such as "Venus Penis Crusher" and "She-Fire Of Ice", it's hard to believe that this was ever meant to be a band to be taken seriously.

In any event, the one album is anthemic, simplistic metal, bordering on thrash at times (particularly on I Wish You Were A Beer, which got some decent MTV play at the time). but otherwise not a lot is known about the band. Debuting at a time where grunge was beginning to take hold, the album failed to take hold and the band soon disappeared.

One of the female members of the "cycle sluts," vocalist Vas Kallas, became a founding member of industrial metal band Hanzel und Gretyl in 1993.