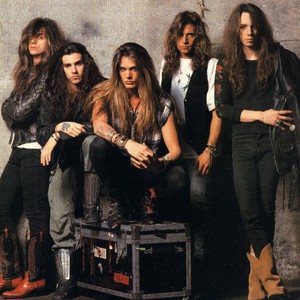 There are at least two artists with this name: 1) An American heavy metal band founded in 1986 formerly fronted by Sebastian Bach. They legally bought the name Skid Row from the Irish band of the same name. 2) An Irish blues rock band founded in 1967, notable as an early band of both Gary Moore and Phil Lynott. A version of this band occasionally tours as Brush Shiels' Skid Row 1) Skid Row is a hard rock/heavy metal band that was formed by bassist Rachel Bolan and guitarist Dave Sabo, who got the band a quick record deal through being close friends with Jon Bon Jovi...

1) An American heavy metal band founded in 1986 formerly fronted by Sebastian Bach. They legally bought the name Skid Row from the Irish band of the same name.
2) An Irish blues rock band founded in 1967, notable as an early band of both Gary Moore and Phil Lynott. A version of this band occasionally tours as Brush Shiels' Skid Row

1) Skid Row is a hard rock/heavy metal band that was formed by bassist Rachel Bolan and guitarist Dave Sabo, who got the band a quick record deal through being close friends with Jon Bon Jovi, lead singer of popular hard rock band Bon Jovi. In 1987 Gary Moore, of the other band name Skid Row, sold the rights to the name for $35,000. The band signed a deal with Atlantic Records and their first self-titled album was finally released in 1989. It included their three most famous songs: "18 and Life", "I Remember You" and their first single "Youth Gone Wild". They performed at the Moscow peace festival in 1989 along with Ozzy Osbourne, Scorpions, M&ouml;tley Cr&uuml;e, Gorky Park, Bon Jovi and Cinderella.

During 1990, the band prepared to record their sophomore record. Spring 1991 saw the release of "Slave To The Grind"; Though not as successful sales-wise as the first album it reached #1 on the American Billboard album charts. In the following year, there was a five-song EP of covers called "B-Side Ourselves". The band took the years 1993 and 1994 off and did not release their third album, "Subhuman Race," until March 1995, which is the last to feature their original line-up.

The band's original line-up parted ways in 1996, when frontman Sebastian Bach was fired and was replaced with singer Sean McCabe. Bach moved on to a solo career and Skid Row never recorded with McCabe. Shortly after Bach's departure drummer Rob Affuso was also fired. The rest of the members, including Sean McCabe, did a project named "Ozone Monday", which never saw a release. There was no sign of reforming until 1999, adding Johnny Solinger as the new singer and Phil Varone on drums. The band finally toured again and put out a new album in 2003, entitled "Thickskin," on their new label, Skid Row Records.

Their most recent album is the late-2006 release "Revolutions Per Minute".

2) Skid Row was an Irish Beat group founded by Brendan "Brush" Shiels in 1967. The original band was called "Your Father's Moustache" and featured Brush on bass, Nollaig "Noel" Bridgeman on drums, Bernard Cheevers on guitar and on lead vocals, Phil Lynott, before he left to journey through SugerShack, Orphanage and finally Thin Lizzy. Chivers also quit around the same time.

Skid Row carried on as a trio pulling in Gary Moore on guitar. This unit opened for Fleetwood Mac in Dublin. The headline act's much respected guitarist Peter Green being so impressed by Moore's playing he recommended the band to several London labels. The band signed to the British arm of CBS Records for their debut album 'Skid', recorded in a paltry 11 hours. Skid Row toured America opening for Savoy Brown and Canned Heat.

A second album '34 hours', the title an indicator of the extravagant amount of time CBS allowed the band to record this time, was issued in 1971 but on the eve of further American dates Moore quit. The guitarist sessioned for Folk Rock act Dr. Strangely Strange and Rockers Granny's Intentions prior to juxtasupposing a worthy solo career (opening with 1973's 'Grinding Stone') with almost legendary stints in and out of Thin Lizzy.

With Moore's departure Skid Row pulled in Thin Lizzy man Eric Bell as a stop gap measure. The position was then filled by ex-Chain Reaction and Universe Welshman Paul Chapman. The new trio re-recorded the guitar parts for the third album but CBS decided to scrap the project. Soon after Chapman opted out creating Kimla Taz then augmenting UFO on tour then founding Iona and Lone Star before joining UFO full time.

Skid Row relocated back to Ireland and went through a succession of guitarists including Ed Dean and Jimmy Slevin. A 1976 live album 'Alive And Kickin' witnessed a band line up comprising Brush Shiels, Elmer Fudd guitarist Jody Pollard, Noel Bridgeman, Dave Gaynor, John Brady, Ian Anderson. Featuring two drummers at the time, this record oddly proved to be a double disc set of Rock n' Roll standards, opening up with a cover of Bachman Turner Overdrive's 'You Ain't Seen Nothin' Yet'. The band subsequently evolved into Brush. Pollard, going on to work with Folk Rock act Shanty Dam, would later have a near union with Thin Lizzy, being second choice after Snowy White. Tragically John Brady would be lose his life during the 90s, killed in an auto accident whilst returning home from a gig.

The shelved third studio album, with Moore's guitar parts, was issued finally in 1990. Bridgeman performed studio work with Clannad and The Waterboys.

Live And On Song

Forty Seasons: The Best Of