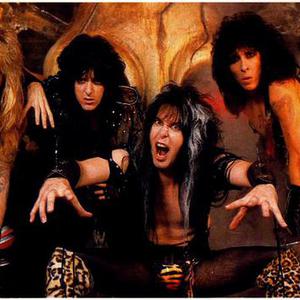 W.A.S.P. is an American heavy metal band formed in 1982 which gained notoriety for its "shock rock"-image, music and live performances. The band, formed in Los Angeles, California, initially consisted of Blackie Lawless, Rik Fox, Randy Piper and Tony Richards. The band initially became famous for its raunchy and at times shocking live shows; Lawless was known to tie semi-naked models to a torture rack and hurl raw meat into the audience. The band's debut single, entitled Animal (Fuck Like A Beast), was equally controversial.

The band, formed in Los Angeles, California, initially consisted of Blackie Lawless, Rik Fox, Randy Piper and Tony Richards. The band initially became famous for its raunchy and at times shocking live shows; Lawless was known to tie semi-naked models to a torture rack and hurl raw meat into the audience. The band's debut single, entitled Animal (Fuck Like A Beast), was equally controversial.

The initial line up didn't last for long, as Rik Fox left the band to join (then unknown) vocalist Ron Keel & guitarist Yngwie Malmsteen in the band Steeler. He was replaced with Don Costa. Shortly after that, Don Costa also left the band and his position on the bass was filled by Lawless. At the same time, guitarist Chris Holmes joined the band.

W.A.S.P. signed to Capitol Records for their debut LP, W.A.S.P., on August 17, 1984. The debut album was at one time planned for release under the name "Winged Assassins". The idea was obviously forgotten though. The band's first single "Animal (Fuck Like A Beast)" was omitted from the album in the United States to prevent the album from being banned from major chain stores. Capitol planned to release it as a single only in Europe, in a black plastic bag with a sticker warning of offensive lyrics. Eventually, however, Capitol was convinced to release the album with its original packaging in April 1984.

L.O.V.E. Machine and I Wanna Be Somebody helped the album sell well, and set the band up for Blind in Texas song written in Minnesota, by Blackie Lawless. The song was released on the next album The Last Command on November 9, 1985. The Last Command album is still W.A.S.P.'s highest charting album. Peaking at #47 on the Billboard album chart. Blind In Texas is still their best known song, 20 plus years later.

W.A.S.P. became a very prominent target of the Parents Music Resource Center, an organization led by Tipper Gore and dedicated to opposing music with lyrics deemed violent or sexual. This pushed the band's reputation to such bad levels that concert halls were getting bomb threats, band members were getting written death threats by the hundreds, and singer Blackie Lawless had been shot at twice (albeit without getting hit). But in the end the publicity helped sales greatly.

Inside The Electric Circus was released on November 8, 1986. The album saw Lawless finally switch to guitar replacing the departed Piper, who'd left W.A.S.P. to audition for Alice Cooper's band. Unfortunately for Piper, Kane Roberts would be Cooper's guitarist. Also former King Kobra bassist Johnny Rod joined W.A.S.P. on bass 'A tired record by a tired band,' as Blackie calls it, spawned a minor hit single 95-n.a.s.t.y. It was a critical review of this single that convinced Lawless of the necessity to take some time off and reconsider the band's creative directions.

In 1987 W.A.S.P. had their song Scream Until You Like It on the movie Ghoulies 2. Also that year concerts on the Inside The Electric Circus album tour were recorded. On November 27, 1987, the Long Beach arena concert was released as the Live...In The Raw album. Unfortunately by the time the live album was released Steve Riley left WA.S.P.. He'd join the band L.A. Guns. A band that had just recorded their debut album L.A. Guns with drummer Nikki Alexander. Alexander left just after the album was recorded, replaced by Steve Riley. He'd be in that band for the next decade.

W.A.S.P.'s fifth album, The Headless Children, was released on April 15, 1989. This was their first album without any sexually explicit songs and also the first one that sold rather poorly. It reached #48 on the Billboard 200 but quickly fell off the charts. However, it was critically acclaimed to be W.A.S.P.'s best work at the time, and according to a recent Lawless interview, it is actually the biggest selling W.A.S.P. album now.

The band effectively disbanded in November 1989 with Blackie Lawless embarking on a solo career. Lawless was originally slated to play T-1000 in the Terminator 2: Judgment Day movie, but was later replaced by Robert Patrick after Arnold Schwarzenegger deemed Lawless 'too tall'. Blackie started work on a solo project, but under pressure from both promoters and fans had to release it as a W.A.S.P. album. Ironically, many critics feel that this album, The Crimson Idol has been the best W.A.S.P. output so far. Blackie recorded this album with the help of Bob Kulick on guitar, Frankie Banali and Stet Howland, with Blackie handling guitar, bass and keyboards.

The follow up to The Crimson Idol was Still Not Black Enough, a collection of dark introspective tunes that extended the Crimson Idol mythology (but this time, without Lawless 'hiding behind' Jonathan Steele, as he stated in the liner notes) as well as included cover songs as "bonus tracks". The initial European edition included a different track listing from the American and a subsequent American re-issue featured yet a different track listing. No version to date includes all the various tracks on one disc.

Chris Holmes returned to W.A.S.P. in 1995. Also, Mike Duda joined the group. Albums K.F.D. (Kill Fuck Die) (1997) and Helldorado (1999) followed. They also recorded two live albums from these two tours, Double Live Assassins and The Sting, respectively. The Sting CD and DVD were taken directly from the experimental webcast. Apparently Blackie had no control over this release and was unhappy with the results with their poor sound and picture quality.

The band continued with Unholy Terror in 2001. Chris Holmes left the band again in 2001, citing that he wanted to 'play the blues'. He hooked up with fellow ex-W.A.S.P. member Randy Piper's band Animal but fell out soon. It's interesting to note that Holmes has claimed he never played on 'Unholy Terror'. Chris was replaced by Darrell Roberts

Dying For The World, released in 2002, was written and recorded in less than a year which is very fast by Lawless' perfectionist standards. Its liner notes feature one of Lawless' strongest statements about political correctness, inspired by the 9-11 terrorist attacks.

In April 2004, W.A.S.P. released The Neon God, Part 1: The Rise, a conceptual album about an abused and orphaned boy who finds that he has the ability to read and manipulate people. The Neon God - Part 2 - The Demise, was released in September 2004.

In 2005, W.A.S.P. headlined American Metal Blast, bringing back the original 'blood and guts' show for the younger generation of metal fans.

In 2006, Stet Howland and Darell Roberts left the band. Patrik Johansson (from Yngwie Malmsteen's band) was announced as touring drummer. In May 2006, Mike Dupke was announced as the new drummer and Doug Blair as the new lead guitarist. Douglas Blair had already worked with W.A.S.P. in 1992, when he played guitar on the Crimson Idol tour.

In the end of 2007, the band embarked on the "Crimson Idol - 15th Anniversary tour. The band would perform "The Crimson Idol" in its entirety, live...

The Best Of The Best CD2

The Best Of The Best CD1

The Neon God Part I: The Rise