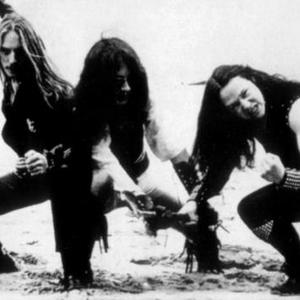 Venom is a metal band formed in Newcastle upon Tyne, UK in 1979. Coming to prominence towards the end of the 'New Wave of British Heavy Metal', Venom's first two albums ? Welcome to Hell (1981) and Black Metal (1982) ? are considered a major influence on thrash metal and extreme metal in general. Venom's second album proved influential enough that its title was used as the name of an extreme metal subgenre: black metal.

Coming to prominence towards the end of the 'New Wave of British Heavy Metal', Venom's first two albums ? Welcome to Hell (1981) and Black Metal (1982) ? are considered a major influence on thrash metal and extreme metal in general. Venom's second album proved influential enough that its title was used as the name of an extreme metal subgenre: black metal.

Venom's original personnel came from three different bands: Guillotine, Oberon and DwarfStar. The original Guillotine featured Jeffrey Dunn and Dave Rutherford on guitars, Dean Hewitt on bass guitar, Dave Blackman on vocals and Chris Mercaters on drums. Blackman and Mercater were replaced by drummer Anthony Bray and vocalist Clive Archer of Oberon and soon after, Dean Hewitt was replaced by Alan Winston on bass. Around the summer of 1979, Conrad "Cronos" Lant from the bands DwarfStar and Album Graecum replaced Rutherford. Around this time, the band adopted the Venom moniker.

Prime influences of the formative band were Black Sabbath, Judas Priest, Mot&ouml;rhead and Kiss. Other bands cited by Venom as an inspiration are Queen, The Who, Deep Purple, Sex Pistols, Van Halen, The Tubes and The Rolling Stones.

A few days before a show at a local church hall, Winston left the band. To fill in, Lant borrowed a bass guitar from Steve Thompson (later to become Venom's first producer). Playing the show with the borrowed bass plugged into his Marshall guitar amp and effects pedals, he created an unnerving racket and the 'Bulldozer Bass' was born.

Venom's recording debut was the 1981 single "In League with Satan"/"Live Like an Angel" which was released by Neat Records. Later that year they released their full-length debut, "Welcome to Hell".

Though crudely recorded with sometimes dubious musicianship, "Welcome to Hell" was still a remarkable tour de force for the era. Venom's music was faster and harsher than most heavy metal contemporaries and while Satanism and other dark topics had been featured in metal before, the subject had rarely been more prominent. Lant was quoted as saying that this celebration of evil subjects was inspired by the perceived need to out-do musicians like Ozzy Osbourne of Black Sabbath, who would 'sing about evil things and dark figures, and then spoil it all by going "Oh No, No Please God help me!"'

Their second album, 1982's "Black Metal" is cited as perhaps the most important influence in the development of black metal, thrash metal, death metal, and other related styles that are often grouped under the extreme metal umbrella. Many defining elements of these genres are first found in the lyrics and song titles created by Lant and his unique singing style as well as the guitar work and solos performed by Dunn. Though they would later be cited as important, neither of Venom's first two albums sold well upon their original release. And while many of their British metal peers had found measures of popular success or critical acclaim (or, like Def Leppard, were moving away from metal towards hard rock), Venom were still regarded by critics as "a trio of buffoons".

In an attempt to prove their status as serious musicians, Venom recorded "At War with Satan" in 1983. The epic 20-minute title track, with substantial progressive rock influences, took up the first side of the LP. The B-side was focused on the rapid-fire, three-minute "scorchers" Venom were known for. In 1985, Venom released their fourth album, "Possessed', which was not as successful as previous albums. Dunn then left the band to pursue a solo career.

Two guitarists, Mike Hickey and Jim Clare, were hired to replace Dunn. Their fifth album, 1987's Calm Before the Storm, moved away from Satanic themes in favor of Tolkien-esque ?Sword and Sorcery? material. This was even less successful than "Possessed", and Lant, Clare and Hickey all left Venom after subsequent touring to form Lant's eponymous solo band Cronos.

Bray was left as the only group member, but he was able to convince Music for Nations for a deal to release a new Venom album on the Under One Flag label, using Deadline demo tracks which were recorded with previous line-ups but never released. In 1988, Bray offered a vocals/bass role to Tony Dolan from Atomkraft. Bray and Dolan wrote new material prior to Dunn's rejoining the band along with rhythm guitarist Al Barnes. Together they recorded Prime Evil (1989), Tear Your Soul Apart (1990) and Temples of Ice (1991). Barnes then left the band, and Steve White from Atomkraft was hired as replacement. They released "The Waste Lands" in 1992, also without success. Music for Nations refused to release any more Venom albums, so Dolan and Dunn quit, effectively disbanding Venom. Bray continued to release compilation and live albums up to 1996.

In 1995, Lant, Dunn and Bray reunited the "classic" line-up, beginning by headlining the Waldrock Festival on 24 June 1995. They recorded and self-released the "Venom '96" EP with four re-recorded and one new song, resulting in a record deal with the SPV label. An album, "Cast in Stone", was next released in 1997, split between new material and re-recordings of popular early-'80s songs.

Bray left Venom in 1999 and was replaced by Lant's brother Anthony "Antton" Lant. This lineup released "Resurrection" in 2000 on SPV. However, in 2002 Dunn again left the group and was replaced by a returning Hickey. In late 2005, Venom released a career-spanning 4-disc box set "MMV", which includes an exclusive mini-poster of the band's seven-date tour of Europe with Metallica and a 60 page picture book, with interviews and pictures. The set includes all their best-known songs, along with rarities like live tracks, demos and outtakes. This lineup of the band released the "Metal Black" album.

Hickey left the group 2007, with a guitarist calling himself "Rage" serving as his replacement. This lineup released the record "Hell" in 2008. Anthony Lant has since left the group and has been replaced by drummer Danny "Dante" Needham.

Currently, the band is in the studio recording their next album which is due for release at the end of 2010 and also negotiating some live shows afterwards. Cronos commented saying, "There's a fresh energy with the new line-up and the sessions are going great, Dante is a really big hitter which is fantastic, his playing went down a storm with the South American Legions during our Latin American tour in December 2009. Rage has been tearing up the decibels and cranking his amp valves white hot, so the new album is sounding killer and should be ready to be unleashed end 2010".

Sons Of Satan: Rare And Unreleased

The Singles - In League With Satan / Live Like An Angel CD1