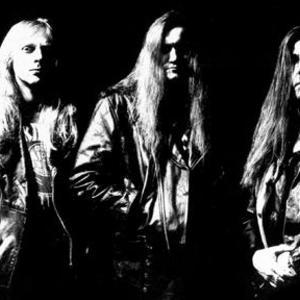 There are two artists with this name. 1) Sodom is a German thrash metal band formed in Gelsenkirchen, Germany in 1981. Along with the bands Kreator and Destruction, Sodom is considered one of the "big three" of Teutonic thrash metal. While the other two bands created a sound that would influence death metal, Sodom's music style would greatly influence many late-1980s and early-1990s black metal bands, among others.

1) Sodom is a German thrash metal band formed in Gelsenkirchen, Germany in 1981.

Along with the bands Kreator and Destruction, Sodom is considered one of the "big three" of Teutonic thrash metal. While the other two bands created a sound that would influence death metal, Sodom's music style would greatly influence many late-1980s and early-1990s black metal bands, among others.

Sodom's original line-up consisted of Tom Angelripper, Bloody Monster, and Aggressor. The band was initiated by Tom as a desperate attempt to get out of having to work in coal mines in his hometown of Gelsenkirchen. Taking inspiration from bands such as Mot&ouml;rhead, Saxon, Tank, Venom and Accept, the group released two demos which led to a record deal with Steamhammer (which were not recorded with Bloody Monster, who by this time was replaced by Chris "Witchhunter" Dudek). Aggressor left the band shortly before releasing the "In the Sign of Evil" EP (generally regarded as an important early black metal release), and was replaced by Grave Violator, who himself did not last long, and left following the recording of "In the Sign of Evil". Michael "Destructor" Wulf was found as a replacement, after which the band went and recorded "Obsessed by Cruelty", their full-length debut featuring music that was mostly in the vein of "In The Sign of Evil". Wulf did not last in the band long, and later went and joined Kreator (he would not last long there either, and he died in 1993 after a tragic motorcycle accident).

For the most part, Sodom was at first not taken seriously, with various press sources describing them as "a second-rate Venom clone with semi-inventive lyrics". One member would change that. Frank "Blackfire" Gosdzik came in to fill the guitar spot Wulf had left behind. Frank convinced Tom that thrash metal was moving beyond horror/occult/satanic themes of bands like Venom to embrace political, societal, and war themes. Tom was already interested in various wars yet remained a peacenik. New inspiration culminated into Frank's full-length debut with the band, "Persecution Mania". The new lyrical approach and increased musicianship on the part of Frank gave the band great acclaim (as well as a gas-masked mascot Knarrenheinz, who appeared for the first time on Persecution Mania's cover). They soon embarked on a tour of Europe with the Swiss thrash metal band Coroner. After touring for the better part of 1987 and 1988, the band returned to the studio to make another album. The final product, "Agent Orange", sold 100,000 copies in Germany alone. This made Sodom famous, giving them worldwide critical acclaim, and secured their place alongside Kreator and Destruction as one of the great Teutonic thrash metal bands. To this date, "Agent Orange" has sold more than any other German thrash-metal album in the world.

Problems were brewing inside of the band, however. Tom and Chris descended further into alcoholism?and in Chris's case, drug use. Furthermore, Frank had grown tired of composing music that his band-mates would often perform poorly live. Mille Petrozza of Kreator offered Frank a position with his band, after they lost their second guitarist, and Frank accepted. Angelripper went out looking for a replacement and found Michael Hoffman, formerly of German thrashers Assassin.

With this line-up, the album "Better off Dead" was released in 1990. During the South American tour however, Hoffman decided to stay in Brazil and was therefore forced to quit. Andy Brings replaced him, and a new album was recorded, "Tapping the Vein", with more of a death metal sound. This proved to be the last album with the drummer Witchhunter: He was kicked out of the band, and Atomic Steif formerly of both Holy Moses and Living Death became his replacement behind the drum kit.

The group recorded the album, "Get What You Deserve". The death metal influences were out; the influence of punk came in. "Get What You Deserve" had an arguably grotesque album cover (featuring a dead man shot and lying in his bed with a woman tied-up nearby), and many fans did not take to the band's new direction. This period also marked the beginning of less international visibility for the band as thrash lost its commercial viability for the remainder of the 1990s. Angelripper also started a solo career doing metal impressions of drinking songs, German schlagers and even Christmas-type carols. A live album was recorded of the tour in support of the resulting album called "Marooned - Live".

"Masquerade in Blood", in the same vein as the previous album, was released in 1995. Again another guitarist had to be found. The new choice, Strahli, did not stay very long with the band. He was arrested and imprisoned on drug-related matters and has since been difficult to locate, mostly because he's homeless. Atomic Steif also left and again Angelripper needed to search for new members. These were found: a guitarist in Bernemann and a drummer in Bobby Schottkowski. This line-up stabilized the band significantly and is still current.

The album "'Til Death Do Us Unite" featured a controversial album cover, depicting a woman's pregnant belly and a man's beer gut pressing in a human skull together. This album marked the beginning of Sodom's return to thrash but was more along the lines of a thrash-crossover sound and had much in common with bands like Suicidal Tendencies. It also spawned the song for which Sodom would make their most famous music video, the highly-controversial song "Fuck The Police." After this album, Sodom returned to the studio and released "Code Red" in 1999 which marked a full return to the Teutonic thrash metal sound of the 1980s, and it was met with praise from fans and press alike. A limited edition featured a bonus CD containing a tribute to Sodom album, "Homage to the Gods". With 2001 came the release of "M-16", a concept album about the Vietnam War, which took its title from the famed M16 assault rifle. A tour followed with the other two big German thrash metal bands Kreator and Destruction, but Sodom ended up going on its own halfway through the tour due to a feud between Destruction bassist Marcel "Schmier" Schirmer and Tom Angelripper. Destruction claimed Sodom ripped off their music and sound.

In 2003, a double live album was recorded in Bangkok, Thailand, titled "One Night in Bangkok". A new album simply titled "Sodom" was released in 2006, in the same vein as "M-16". The title was chosen - as Angelripper explained it - because every band needs a self-titled album, and the band had never released one. The album was delayed however, because the DVD "Lords of Depravity" took more time to compose than initially thought.

In 2007, Tom was asked by the record label Steamhammer for any tracks to be released on the "In The Sign Of Evil" EP. Tom believed there were, and the label floated the idea to Tom to get ex-members Chris Witchhunter and Grave Violator (real name: Franz Josef Peppi) to re-record the EP with the bonus tracks. The result became "The Final Sign of Evil". Chris "Witchhunter" Dudek died on 7 September 2008 from liver failure after a long battle with illness.

In 2009, Sodom returned to the UK to play their first show in 20 years at Bloodstock Open Air.

The band is now currently in the studio recording their next album entitled "In War And Pieces" which is due for release on November 22, 2010 via SPV records.


2) ????? were an early-mid 80's Japanese punk group, who played mid-speed hardcore punk. Their style takes cues from The SS, Discharge, Typhus, as well as American hardcore. They have one tape (Sodom & Requiem) and were featured with 7 songs on the ADK Omnibus Vol.1 compilation.

40 Years At War - The Greatest Hell Of Sodom

Out Of The Frontline Trench (CDS)

Obsessed By Cruelty - Us Edition CD2