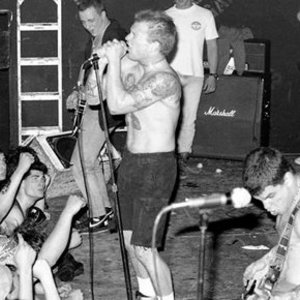 The Cro-Mags are a band from New York City, NY, formed in 1982. The band, which had a strong cult following, released many records, their first two considered the most influential. They were among the first bands to fuse hardcore punk with thrash metal and were associated with the birth of a tougher attitude within the hardcore scene in the late 1980s. They were also one of the first hardcore punk bands associated with the Hare Krishna movement.

They first released a demo with songs that would eventually find themselves on their debut album The Age Of Quarrel (1986). The bass player Harley Flanagan and singer John Joseph were not the best of friends and eventually Joseph would part ways with the band leaving Harley to sing on the following Cro-Mags release. After The Age of Quarrel, the band released the record Best Wishes (1989). The record had a more heavy metal-influenced sound which alienated many of their fans. The band released another record Alpha Omega (1992), that saw the return of Joseph, and the departure of guitarist and songwriter Parris Mitchell Mayhew, a record that was only embraced by the most devoted of their fanbase, and followed by Near Death Experience (1993). After suffering from many lineup changes and frequent breakups, the group finally disbanded, seemingly for the last time, after this record. However, in 2000 they released a record that would almost make up for their past two releases. With Revenge the Cro-Mags came back to their early hardcore roots with songs that were comparable to their first release plus some songs with a more melodic/punk rock feel. After the release of Revenge the band broke up once again, and the internal hostility amongst band members (mainly between Mayhew and Flanagan) has never been resolved.

Hard Times In An Age Of Quarrel CD2

Hard Times In An Age Of Quarrel CD1

The Age Of Quarrel