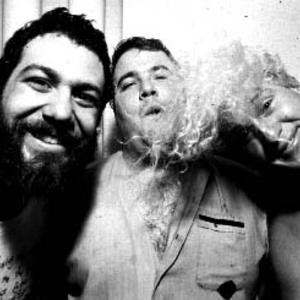 The Minutemen were a punk rock trio which formed in 1980 in San Pedro, California, United States. The band comprised guitarist/vocalist D Boon and his childhood friend, bassist/vocalist Mike Watt, along with a former high school classmate on drums, George Hurley. The group played funk influenced punk rock music in the early 1980s never finding (or even seeking) much mainstream success, but influencing many subsequent musicians. The group ended when Boon died in an automobile accident in Arizona in December 1985.

The group played funk influenced punk rock music in the early 1980s never finding (or even seeking) much mainstream success, but influencing many subsequent musicians. The group ended when Boon died in an automobile accident in Arizona in December 1985.

They were influenced heavily by bands such as Wire, Gang of Four, The Pop Group, The Urinals and also funk bands of the late '60s and '70s were an important influence. nearly all of their early songs had unusual structures and were less than a minute long ? even later when the Minutemen's music became slightly more conventional, their songs rarely passed the three-minute mark.

Boon and Watt split songwriting fairly evenly (and Hurley made many contributions as well), though Watt rarely sang, and Hurley even less so. Boon's songs were typically more direct and progressively political in nature, while Watt's were often abstract, self-referential "spiels". Lyrics and themes would thus often veer from surreal humor, as in "Bob Dylan Wrote Propaganda Songs" and "One Reporter's Opinion", to the frustrations of blue collar life in California, as in the enduring "This Ain't No Picnic". While many contemporaries rarely displayed a sense of humor, the Minutemen were generally more light-hearted and whimsical. One example of this can be found in the title of their legendary album Double Nickels on the Dime, which poked fun at Sammy Hagar's "I Can't Drive 55" by implying that the Minutemen preferred to take risks with their music rather than behind the wheel of a car. Ironically, D. Boon died in a van accident in which he was not wearing a seat belt and was ejected from the vehicle.

The Minutemen were fans of Captain Beefheart, and echoes of his distinctive music can be heard in their songs, especially their early output. Through most of their career they ignored standard verse-chorus-verse song structures, in favor of experimenting with musical dynamics, rhythm and noise. Later in their career they blended in more traditional song elements they had initially avoided. They also played covers of classic rock songs by bands such as Creedence Clearwater Revival, Steely Dan and Blue &Ouml;yster Cult. Their covers were done out of appreciation for those bands' work rather than to be ironic, thereby diverging dramatically from hardcore punk orthodoxy of the 1980s.

They originally called themselves the reactionaries, with additional band member and singer Martin Tamburovich. According to Watt, the name came from a Mao Tse-Tung quote about how all reactionaries are actually "paper tigers".

After the Reactionaries disbanded, Boon and Watt formed The Minutemen in January of 1980; the band's name was derived partly because of the fabled minutemen militia of colonial times, and partly to take the name back from a right-wing reactionary group of the 1960s that used to harass figures like Angela Davis through the mail. After a month with no drummer ? during which Boon and Watt wrote their first batch of tunes, the band rehearsed and played a couple of early gigs with local welder Frank Tonche on drums. The group originally wanted George Hurley to join, but he had joined a new wave band called Hey Taxi after the Reactionaries disbanded. Tonche quit the group, citing a dislike of the audience the band initially drew, and Hurley took over the drum seat in June of 1980. (Rehearsal recordings with Tonche on drums later appeared as the posthumous EP Georgeless in 1987.)

Greg Ginn of Black Flag and SST Records produced the Minutemen's first 7" EP, Paranoid Time, which solidified their eclectic style. At first, they completely avoided guitar solos, choruses, and fade-outs. Later, they were known for hybridizing punk rock with forms of jazz, funk, acid rock, and R&B in novel ways, perhaps best exemplified on 1984's double-album, Double Nickels on the Dime. Though still somewhat obscure to mainstream audiences, Double Nickels has been cited as one of the more innovative and enduring albums of the 1980s American rock underground. On Double Nickels, they co-wrote some songs with other musicians, notably Henry Rollins, Chuck Dukowski and Joe Baiza.

The group's early recordings (up until their 1985 12" EP Project: Mersh) were recorded as "econo" (Pedro slang for inexpensive, short for "economic") as possible - the group would book studio time after midnight at cut rates, rehearse the songs prior to going into the studio, record on less expensive used tape, and record the songs in the order they intended to have them on the record rather than waste time editing the master tape during the sequencing phase. In fact, contrary to standard practice even in indie rock, the Minutemen saw records as a way to promote their tours, not the other way around.

The Minutemen toured frequently, but usually for only a few weeks at a time--they all held down day jobs. Their "econo" practices helped ensure that their tours were always profitable, unlike some of their SST peers.

Several Minutemen album sleeves and covers, such as the Paranoid Time EP and What Makes a Man Start Fires? LP and the inner gatefold jacket for Double Nickels, feature drawings by noted artist Raymond Pettibon, who was at the time associated with the SST label, providing sleeves for Black Flag. Other album covers, like on The Punch Line and 3-Way Tie For Last, featured paintings by D. Boon.

Following Boon's death, Watt and Hurley originally intended to quit music altogether. But encouraged by Minutemen fan Ed Crawford, they formed fIREHOSE and have had solo projects since the Minutemen disbanded.

From 1999 until the show's cancellation, an instrumental version of the Minutemen's song "Corona" (off Double Nickels) was the theme song of the MTV television show Jackass.

In 2000 Watt, as administrator of the band's publishing, allowed the auto maker Volvo to use the D. Boon instrumental "Love Dance" (from Double Nickels...) in a car ad. Watt's motivation for licensing the song was actually generosity rather than greed, as Boon's royalties at the time were being paid to his father, who was suffering from emphysema; Watt simply refers to the decision as a way for D. Boon to help his father from beyond the grave.

Since 2001 Watt and Hurley have done occasional gigs, mainly in the L.A. area except for two December 2004 shows in England, playing Minutemen songs as a duet with no guitarist. At some of these gigs, Watt would set up one of D. Boon's old guitars and amps on the side of the stage where Boon used to stand. Rather than cheapen or "vampire" the Minutemen name, these performances, at Watt's insistence, are to be billed strictly as "George Hurley and Mike Watt". They are also now involved in an improvisational music group, Unknown Instructors, with members of Saccharine Trust and Pere Ubu.

The group's career is chronicled in the book Our Band Could Be Your Life, a study of several important American underground rock groups whose title is taken from the lyrics to the Double Nickels track "History Lesson Pt.2"; and the film We Jam Econo ? The Story of the Minutemen, which charts the band's history through interviews with Watt, Hurley, Henry Rollins, Flea of the Red Hot Chili Peppers, and other California punk rock contemporaries (Billboard Review). The film premiered at the Warner Grand Theatre in the Minutemen's hometown of San Pedro in February 2005.

In 2003, Watt released his own book on the Minutemen, Spiels of a Minuteman, which contains all of Watt's song lyrics from the Minutemen era as well as the tour journal he wrote during the Minutemen's only European tour with Black Flag, essays by former SST co-owner Joe Carducci, Sonic Youth's Thurston Moore, and Blue ?-yster Cult lyricist and longtime Watt hero Richard Meltzer, and illustrations by Raymond Pettibon that had been used in all of the Minutemen's album artwork. The book, released by Quebec-based publisher L'ole De Cravan, is published in both English and French.

Mike Watt has dedicated all of fIREHOSE's releases and his solo albums to the memory of D. Boon. "Disciples of the 3-Way" on fIREHOSE's final studio album Mr. Machinery Operator is about the Minutemen, and "The Boilerman" from Watt's second solo album Contemplating The Engine Room (which parallels the stories of The Minutemen, Watt's father, and the novel The Sand Pebbles) is about D. Boon.

The Minutemen track "Sickles and Hammers" (from Paranoid Time) was covered by Sebadoh on 1991's Sebadoh III.

Sublime (whose lead singer, Bradley Nowell also died prematurely) sampled "History Lesson Part II" (though, only about two seconds of it ? specifically, D. Boon saying "Punk rock changed our lives") from Double Nickels... as part of their song "Waiting For My Ruca" in 1992. Watt repaid this salute by appearing in Sublime's video for "Wrong Way" in 1996. Sublime also sampled George Hurley's drum intro from "It's Expected I'm Gone" for their "Get Out! (remix)" on their posthumous release Second Hand Smoke. On their eponymous debut LP, San Diego-based indie rockers Pinback also used the same drum loop from "It's Expected I'm Gone"; in his honor, the band named the track "Hurley."

Jem Cohen and Fugazi dedicated their 1999 film Instrument to the memory of D. Boon.

The rising indie band Calexico covered "Corona", a staple of their live act for quite some time, on their 2004 EP Convict Pool, adding mariachi trumpets reminiscent of Johnny Cash's "Ring of Fire".

The Politics Of Time

Double Nickels On The Dime

Buzz Or Howl Under The Influence Of Heat (EP)