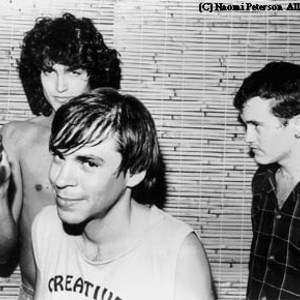 The Meat Puppets are a rock band formed in Phoenix, Arizona in 1980. The band's best known lineup consisted of Curt Kirkwood (vocals, guitar), Cris Kirkwood (bass) and Derrick Bostrom (drums) (a lineup that lasted from its inception to 1996). They began rehearsing together by learning songs from Bostrom's collection of punk rock 45s. After briefly toying with the name "the Bastions of Immaturity," they settled on the name Meat Puppets in June, 1980, after a song by Curt of the same name which appears on their first album.

Their early works (the In A Car EP and Meat Puppets LP) were wholeheartedly punk, with vocals so feral in their delivery they were often indecipherable, but ultimately humorous and clever once deciphered. The musicianship was mostly thrash, yet the songs were tinged with a subtle, haunting element like that of a long abandoned ghost town. Their brand of cathartic, explosive hardcore attracted the attention of legendary punk label SST, who released their first record in 1982.

Unsatisfied with the result, the band spent plenty of time in the studio before the release of 1983's Meat Puppets II. The band's exciting experimentation with psychedelia, acid rock, and quieter tunes on top of a core western-style thrash sound, gave them their one acknowledged classic album, and propelled the record to legendary status. Meat Puppets II turned Meat Puppets into the one of the leading bands in SST Records league and, along with Violent Femmes, the Gun Club and others, helped establish country punk.

The Meat Puppets' burgeoning musicality led to more intricate and melodic efforts on 1985's Up on the Sun, which was a cohesive collage of songs that further demonstrated their abilities to capture a sound that had all of the wonder of the desert. The band's sound and vision became closely aligned with the legacy of The Byrds; some of the group's fans accused the Meat Puppets of becoming dangerously hippy-sounding (this appreciation of "hippy" music was hardly a sudden development: Curt's guitar solos were, from the beginning of his career, often reminiscent of Jerry Garcia). However, Up On The Sun demonstrated strong musicianship, accompanied by an unfading ability to write sophisticated and intriguing songs. This album generated the band's first major mainstream exposure, and many fans still consider it to be their masterpiece.

Over the next decade, the Meat Puppets remained on SST and released a series of albums, touring almost relentlessly on the underground circuit. After the release of Out My Way in 1986, however, the band was briefly sidelined by an accident when Curt's finger was broken after being slammed in their touring van's door. The accident delayed the band's next album, the psychedelic Mirage, until the next year. The final result was a meticulously crafted release in early 1987, and their most polished sound to date. Mirage at the time was hailed by some mainstream critics as the Puppet's best work yet.

Subsequently, their next album, the heavier, power-trio-rooted Huevos came out less than six months afterward, in late summer of 1987. In stark contrast to its predecessor, Huevos was recorded in a swift, fiery fashion, with many first takes, and minimal second guessing. The album was named, not only after the Spanish word for eggs, but was also a reference to the Spanish slang use of the word "Huevos" to mean "testicles." This was significant not only with regard to the songs themselves, but to the bold, rough manner in which they were recorded. These recordings were completed in only a matter of days, and along with a few drawings and one of Curt's paintings taken from the wall to serve as cover art (a dish of three boiled eggs, a green pepper, and a bottle of Tabasco sauce), was all sent to SST shortly before the band returned to the road en route to their next gig.

Monsters was released in 1989, featuring Curt-as-guitar-hero on such extended jams as "Touchdown King" and "Flight of the Fire Weasel."


Major label career (1991-1995)
As numerous bands from the seminal SST label, and other kindred punk-oriented indies, grappled with the "going major" decision, so did the 'Pups. Two years after their final studio recording for SST, 1989's Monsters, the trio released its major label debut, Forbidden Places, on the indie-friendly London Records. A three-year break saw the band's studio return with 1994's Too High To Die, produced by Butthole Surfers guitarist Paul Leary. The album featured "Backwater", a hit on alternative radio, and a hidden-track update of "Lake of Fire." Too High To Die earned the 'Pups a gold record (over 500,000 sold), outselling their previous records combined. That same year saw the 'Pups in their brightest mainstream spotlight as the band achieved sudden popularity when Nirvana's Kurt Cobain invited Cris and Curt to join him on MTV for acoustic performances of "Plateau", "Oh Me" and "Lake of Fire" (all originally from Meat Puppets II). The resulting album, MTV Unplugged in New York, served as a swan-song for Nirvana, as Cobain died six months after the concert. "Lake of Fire" became a cult favorite for its particularly wrenching vocal performance from Cobain. Subsequently, the Nirvana exposure and the strength of the single "Backwater" (their only charting single) helped lift the Meat Puppets to new commercial heights.

1995's No Joke! would be the final album recorded by the original Meat Puppets lineup. Unfortunately, Cris Kirkwood was now a heroin addict, whose heavy and compulsive use of the drug increasingly dominated his life. This was a major departure from the psychedelic drugs with which the Meat Puppets had always been associated; his erratic behavior soon became too much for the band to cope with. The first single from No Joke!, "Scum", charted briefly on the modern rock charts, but ultimately the album paled in success to its predecessor.


First hiatus and reunion (1996-2000)
Derrick recorded a solo EP under the moniker Today's Sounds in 1996, and later on in 1999 took charge of re-issuing the Puppets' original seven records on Rykodisc as well as putting out their first live album, Live in Montana. Curt formed a new band in Austin, TX called the Royal Neanderthal Orchestra, but they changed their name to Meat Puppets to release a promotional EP entitled You Love Me in 1999, Golden Lies in 2000 and Live in 2002. The line-up was Curt (voc/git), Kyle Ellison (voc/git), Andrew Duplantis (voc/bass) and Shandon Sahm (drums). Sahm's father was the legendary fiddler-singer-songwriter Doug Sahm of The Sir Douglas Quintet and Texas Tornados. The concluding track to Classic Puppets entitled "New Leaf" also dates from this incarnation of the band.

His brother Cris was arrested in December 2003 for attacking a security guard at a post office with the guard's baton. The guard shot Kirkwood during the melee. Kirkwood was subsequently denied bail, the judge citing Kirkwood's previous drug arrests and parole violations. He eventually went to prison for felony assault. He was released in July of 2005.

Derrick Bostrom began a home page (www.meatpuppets.com) for the band about six months before the original trio stopped working together. The site went through many different permutations before it was essentially mothballed in 2003. In late 2005, Bostrom revamped it once again, this time as a "blog" for his recollections and as a place to share pieces of Meat Puppets history.


Second reunion (2006-present)
On March 24, 2006, Curt Kirkwood polled fans at his MySpace page with the following bulletin: "Question for all! Would the original line up of the Meat Puppets interest anyone? Feedback is good - do you want a reunion?!" The response from fans was overwhelmingly positive within a couple of hours, leading to speculation of a full-blown Meat Puppets reunion in the near future. However, a post made by Derrick Bostrom on the official Meat Puppets site dismissed the notion.

An April 26, 2006 billboard.com story reported that the Kirkwood brothers would reunite as the Meat Puppets without original drummer Derrick Bostrom. Primus drummer Tim Alexander was announced as Bostrom's replacement. Curt mentioned that a new Meat Puppets album was written, but it has not yet been recorded. Curt continued to tour on his solo material with his son Elmo.

Tim Alexander never ended up drumming with the Meat Puppets. Instead, Ted Marcus is the band's current drummer.

Rise To Your Knees

Taste Of The Sun (EP)