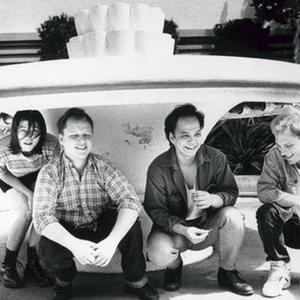 Pixies is an American alternative rock band which formed in Boston, Massachusetts, United States in 1986. They consist of Charles (Black Francis) Thompson IV (vocals, guitar; also known as ''Frank Black''), Kim Deal (bass, vocals), Joey Santiago (guitar) and David Lovering (drums). The band officially split in 1993 and reunited in 2004. They went on hiatus in 2007, with each band member pursuing projects of their own, only to reunite in 2009, with the announcement of a new tour commencing in Europe that summer.

Although quite popular on alternative rock radio in the United States due to heavy airplay of the singles "Monkey Gone to Heaven" and "Here Comes Your Man", they were never widely popular there, but found success in Europe, especially in the UK (where they managed three top 40 singles "Velouria", "Planet of Sound" and a re-release of "Debaser") and Belgium and the Netherlands, where they were heavily broadcasted by alternative public radio.

The band's style of alternative rock music is heavily influenced by punk and surf rock, and while highly melodic, is capable of being tremendously abrasive at the same time. Francis is the Pixies' primary songwriter and singer and has a distinctly desperate, yowling delivery. He has typically written cryptic songs about offbeat subjects, such as UFOs and surrealism. References to mental instability, violent Biblical imagery, and physical injury feature in many of the band's songs.

The group is frequently posited as the immediate forebear of the alternative rock boom of the 1990s, though they disbanded before reaping any of the benefits this might have brought them. Avowed fan Kurt Cobain's acknowledgement of the debt Nirvana owed to the Pixies, along with similar tributes by other alternative bands, ensured that the Pixies' legacy and influence grew substantially in the years following their demise.

In 1993, during an interview with BBC Radio 5, Black Francis announced that the band had split - something he had not told his bandmates. After the interview, he called Santiago, who in turn faxed Deal and Lovering the news the next morning. After the split, Black Francis inverted his stage name to Frank Black and embarked on a successful solo career, while Deal resumed her role in The Breeders with her identical twin sister Kelley. In 2004, the band reunited for a tour - documented in the film loudQUIETloud - and released a new single, "Bam Thwok" that summer. In 2007, Black Francis (now going by that name again) stated in an interview that the reunion was "done" even though the members remain in good terms with each other. In later interviews however, he began to mention that he might be willing to record another Pixies album. Nonetheless, Francis has returned to his solo career and Deal to the Breeders, both of which released albums and toured in 2008. Lovering and Santiago, meanwhile, set up their own project, a band called Everybody.

In order to celebrate the 20th anniversary of the release of Doolittle, Pixies launched a tour in October 2009, on which they perform all the album's songs and B-sides. In the autumn of 2011 the "Lost Cities" tour continued the "Doolittle Tour" as they played many venues for the first time.