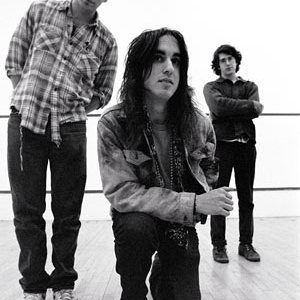 Dinosaur Jr. is a rock band which formed in 1983 in Amherst, Massachusetts. The band was formed by J Mascis (guitar and vocals) and his high school classmate Lou Barlow (bass guitar), following the break-up of their hardcore punk band Deep Wound. Shortly afterwards, Murph (Emmett Patrick Murphy, drums) joined them. The band was originally called "Dinosaur", but changed its name following the release of its debut album Dinosaur in 1985, after a band called Dinosaurs, featuring ex-members of Country Joe and the Fish and Jefferson Airplane, threatened them with legal action.

The band was originally called "Dinosaur", but changed its name following the release of its debut album Dinosaur in 1985, after a band called Dinosaurs, featuring ex-members of Country Joe and the Fish and Jefferson Airplane, threatened them with legal action. (They still used the name Dinosaur on their albums until 1987 at the latest, and some copies of You're Living All Over Me still lack the "Jr").

In 1987, Dinosaur Jr. signed to SST Records on the recommendation of Sonic Youth, and with them released what is often considered their best album, You're Living All Over Me. Bug followed the next year, an album which, in the UK, was released by Paul Smith's Blast First Records (home to Sonic Youth, Big Black and Butthole Surfers). During this period Dinosaur Jr. became known for their very loud concerts.

Despite not gaining much commercial success, the band has enjoyed something of a cult following. The success of singles Freak Scene and Just Like Heaven, and recommendations from the likes of Sonic Youth saw them signed by Warner Brothers. The signature Dinosaur Jr. sound is the melodic tunes saturated in layers of guitar noise and punctuated by J Mascis' elaborate, yet laconic guitar solos. They were a major influence on the up-and-coming band Nirvana.

Tensions ran high between Mascis and Barlow, and in 1989 Barlow was kicked out of the band. As a result, Barlow continued to work with his own band, Sebadoh. The two famously fell out on stage with Mascis attacking Barlow. Dinosaur Jr. subsequently became little more than a pseudonym for Mascis. He switched labels to Blanco y Negro in the UK, Warner/Sire in the US, with Green Mind (1991) being his first release in that deal.

After Barlow left the band, Van Conner, from the Screaming Trees, played bass for at least one live show in 1990, and Donna Dresch, from Team Dresch played bass at least once live with the band in 1990.

Murph left the band in late 1993, after the Lollapalooza tour.

Through the 90s, Mascis sometimes explored quieter and more tranquil shores than Dinosaur Jr. had in the 80s. The band formed part of the 1992 "Rollercoaster" tour. A package tour based on the successful "Lollapalooza". The tour featured The Jesus & Mary Chain, My Bloody Valentine & Blur. On the 1993 release, Where You Been, the opening track ("Out There") had an accompanying video and was aired on MTV for a short time. After 1994's Without a Sound and 1997's Hand It Over, Mascis began to release albums with the band J Mascis and the Fog.

In 2004, J Mascis regained the master rights to the first three Dinosaur Jr. albums from SST, and arranged for their reissue on the Merge label in early 2005. The reissues coincided with an announcement that the original lineup of J Mascis, Lou Barlow and Murph (Emmett Patrick Murphy) were reuniting for a summer tour. The success of this tour resulted in a new album entitled Beyond (2007) and single Been There All The Time. They are Lou Barlow's first recording with the band since 1989. The original line-up of Dinosaur Jr. has been touring extensively since 2005. They are currently on a world tour.

On February 20, 2009, Pitchfork Media announced that the band had signed with indie label Jagjaguwar, and their first release on the label entitled Farm was released June 23, 2009, to largely positive reviews.

Emptiness At The Sinclair

Sweep It Into Space

Where You Been (Deluxe Expanded & Remastered Edition) CD2

Where You Been (Deluxe Expanded & Remastered Edition) CD1

Without A Sound (Expanded & Remastered Edition)

Give a Glimpse of What Yer Not

I Bet On Sky