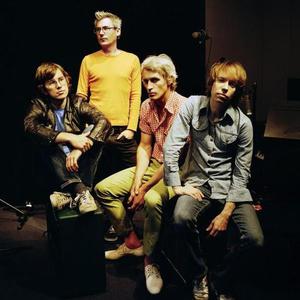 Sloan is an alternative rock band which formed in 1991 in Halifax, Nova Scotia, Canada and currently based in Toronto, Ontario. Since its formation, the band has consisted of Jay Ferguson (vocals, guitar), Patrick Pentland (guitar, vocals), Chris Murphy (vocals, bass) and Andrew Scott (drums, vocals). The band has released ten albums since their formation, the most recent being "The Double Cross" released on May 10, 2011.

The band was formed in 1991 when Chris Murphy and Andrew Scott met at the Nova Scotia College of Art and Design (NSCAD) in Halifax; Patrick Pentland and Jay Ferguson joined soon after. In 1992 the band created their own record label, Murderecords, for themselves and other Halifax area bands, and released the Peppermint EP.

According to Sloan's official website, the band's name refers to a friend's nickname. Their friend Jason Larsen was called Slow One by his French-speaking boss, which with the French accent sounded more like Sloan. The original agreement was that they could name the band after their friend's nickname as long as he was on the cover of their first album. As a result, it is Larsen who appears on the cover of the Peppermint EP.

Later in 1992 Sloan released their full-length album Smeared on Geffen Records. In 1994 Geffen did not promote their second album, Twice Removed, due to artistic disputes, although it sold well in Canada. Spin named it one of the "Best Albums You Didn't Hear" in 1994. A 1996 reader poll by Canadian music magazine Chart! ranked it as the best Canadian album of all time, only two years after its release. The same poll in 2000 ranked the album third, behind Joni Mitchell's Blue and Neil Young's Harvest. However, the 2005 poll once again ranked the album first.

After the release of Twice Removed, the band went on hiatus and were rumoured to have broken up, as they had rejected Geffen's offer for their next album. In 1996, however, they released the widely praised One Chord to Another on their own Murderecords label. Following 1998's Navy Blues album, Sloan released their first live album 4 Nights at the Palais Royale in 1999. Those albums were followed by Between the Bridges in 1999, and Pretty Together in 2001.

Sloan made a concerted effort to break into the US market on their 2003 release Action Pact. Songs were recorded in L.A. with Tom Rothrock producing. The glossier, radio-ready sound failed to raise Sloan's profile in the US, though they continued to be highly popular in Canada.

Now signed to Yep Roc Records for their US releases, they put out their eighth disc, Never Hear the End of It in 2006. The album contained 30 tracks with all the members of the band contributing new songs. It was met with widespread critical acclaim and became the highest charting Sloan album in the US up to that point.

In 2008, Sloan followed up their longest album with their shortest release Parallel Play.

In November 2009 Sloan added a digital music store to their website. The band released an online-only EP called Hit & Run to promote the store. The EP featured two songs by Chris Murphy, and one by each of the other band members. Murphy's Take It Upon Yourself was released as a free single. In February 2010, the band released another online exclusive, the compilation album B-Sides Win: Extras, Bonus Tracks and B-Sides 1992 - 2008.

Sloan announced plans to release a 10th album in 2011, to coincide with the 20th anniversary of their first show.[8]

On February 22, 2011, Sloan announced that their new album would be released on May 10, 2011. The album is entitled The Double Cross, a nod to their 20th (or XX) anniversary. The album is preceded by the its first single, "Unkind".

With the release of the The Double Cross, Sloan has now released a catalogue of around 175 different songs.

In promotion of the new album, a special video series produced and directed by Catherine Stockhausen has been launched on YouTube to commemorate the illustrious success of the band. Interviewed in these videos are several musicians and celebrities such as Jason Schwartzman, Joel Plaskett, Stefan Brogren, Dave Foley, Kevin Drew, Buck 65, Ian D'Sa and Benjamin Kowalewicz from Billy Talent, K-OS, and Dave Hamlin.

Never Hear The End Of It