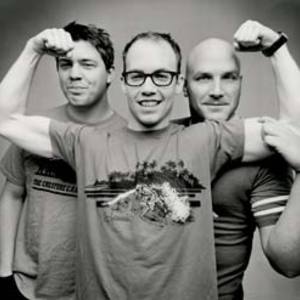 Ultimate Fakebook was a band from Manhattan, KS, whose style of pop-punk/powerpop sound helped ignite the emo explosion that included fellow Kansans the The Get Up Kids and The Anniversary in the late 1990s. They released three full-length albums; Electric Kissing Parties (1998; Noisome Records), This Will Be Laughing Week (2000; 550/Epic Records), and Open Up and Say Awesome (2002; Initial Records). Shortly after releasing their final EP, Before We Spark (2003), they broke up.

Colby has been a part of indie supergroup Carrier, and both Colby and Melin are both currently members of The Dead Girls. Singer Bill McShane made his first musical appearance in over 7 years on 2010's multi-musician studio collaboration The Seven Degrees of Stephen Egerton. Because of the Egerton single, the band decided it was the perfect time to release some of the songs that they had recorded but never released. In July of 2010, they released their fourth album Daydream Radio is Smiling Static which is a collection of non-album tracks that didn't quite make it to the previous three albums.

This Will Be Laughing Week