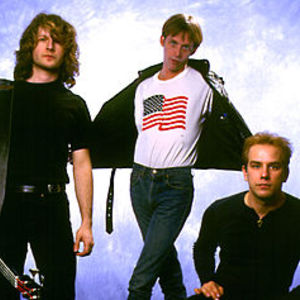 Material Issue was a power pop power trio from Chicago, Illinois. Their trademark was a brand of dense, rich, manic, and powerful pop tunes. Their lyrics revolved heavily around themes of love and heartbreak-- with a phalanx of girl's-first-name-titled songs. Singles such as "Diane" and "Valerie Loves Me" remain staples of rock radio. Formed in 1985, Material Issue was the brainchild of frontman Jim Ellison (who also played guitar, lead vocals and wrote all Material Issue songs). The early days of Material Issue was a revolving door of bass players and drummers.

Formed in 1985, Material Issue was the brainchild of frontman Jim Ellison (who also played guitar, lead vocals and wrote all Material Issue songs). The early days of Material Issue was a revolving door of bass players and drummers. However, Ellison met bassist Ted Ansani while both were attending Columbia Music School in Chicago in 1986. Drummer Mike Zelenko was recruited when the duo found him through an ad in the Illinois Entertainer later that year. With the Material Issue lineup set, Ellison ? with Ansani and Zelenko eager to join him and ready to follow ? set his sights on conquering the pop world.

In 1987, Material Issue released an EP on their own Big Block Label (so named for the big block engines of the 1970s muscle cars Ellison loved) which operated out of Ellison's bedroom at his parents home in Addison, Illinois. In 1988, "Sixteen Tambourines" appeared on College Music Journal's compliation and CMJ glowingly referred to Material Issue's music as a "hooky brand of high-powered psycho-pop". In 1989, their buzz grew further with the release of the single "Renee Remains The Same" which got heavy airplay around Chicago. Over the next two years, the band toured extensively across the midwest and found time to record what would become their debut album. In early 1991, Material Issue broke on to the national scene with their debut album International Pop Overthrow (IPO) which sold over 300,000 copies for Polygram Records. Ironically enough, their debut video for the single "Diane" appeared on MTV's 120 Minutes in late December 1990 which was the episode of the final appearance of Paul Westerberg and Tommy Stinson of The Replacements in sort of a fitting segue between the lesser-known music genres of the two decades (Material Issue and The Replacements would share the stage at Taste of Chicago in 1991 which would prove to be the swansong for The Replacements). IPO spawned nationwide radio hits "Diane" and "Valerie Loves Me" which were just as popular in Chicago as they were in places such as Phoenix, Minneapolis and Dallas. 1992 saw the follow-up to IPO with Destination Universe which featured the searing powerpop gem "What Girls Want" and Material Issue continued to tour heavily across the country in support of both albums. 1994 saw the release of Freak City Soundtrack which featured the hit "Kim The Waitress" (a cover written by Jeff Kelly of Green Pajamas). However, by the time Freak City Soundtrack was released, the momentum they had generated in the previous five years began to subside. Freak City sold less than 50,000 copies as the Seattle scene and the emergence of ska dominated both mainstream and alternative music markets. Other Chicago acts to break national following Material Issue, such as Smashing Pumpkins, Urge Overkill and Liz Phair, had music more fitting for the times and Material Issue, feeling left behind by their label, parted ways with Polygram in early 1995.

Material Issue continued to play live, sold out shows throughout the upper midwest and were one of the headline acts in the first Edgefest (so named for The Edge alternative radio station in Minneapolis, Minnesota at the time which sponsored the event) in the summer of 1995 in Somerset, Wisconsin. Throughout the remainder of 1995 and in to 1996, Material Issue had recorded a new set of songs which they had hoped to shop to a new label. However, Material Issue came to a tragic end when Ellison committed suicide on June 20, 1996 by suffocating himself with carbon monoxide poisoning from his scooter in his garage. No one knows for sure what compelled Ellison to end his life, but two circumstances that seem to be the catalysts were the end of a relationship with a woman on his birthday on April 18, 1996 and the loss of his band's record deal from the previous year. A suicide note was found by police, but the contents of that note remain known only to Ellison's family. The recordings from the work done in 1995 and 1996 would be released posthumously on Telecommando Americano in 1997 by Rykodisc. Telecommando Americano would be the final Material Issue release, but also included the 6-song EP released back in 1987 as a bonus.

Goin' Through Your Purse