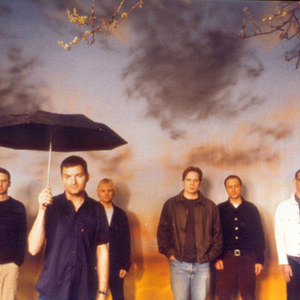 Fringe members of The Elephant 6 Recording Company, and the only band to officially release a full-length on the label, Beulah originally formed in San Francisco in 1996 when mail-room colleagues Miles Kurosky (main songwriter, lead vocals, guitar), and Bill Swan (trumpet, guitar, vocals) got together to make music. Together they recorded a 7", A Small Cattle Drive in a Snow Storm, released in 1997. The same year, Anne Mellinger joined the band and their debut LP, Handsome Western States was released on Elephant 6.

The three were subsequently joined by Steve LaFolette (bass & vocals), Pat Noel (keyboards & guitar), Steve St. Cin (drums), and Ana Pitchon, who toured as Beulah in 1998, before recording When Your Heartstrings Break. Bill Evans (keyboards) then joined the band to play live. Steve St. Cin left the band to be replaced by Danny Sullivan, before The Coast Is Never Clear was released in 2000. Bill Evans and Steve LaFolette then left, to be replaced by Pat Abernathy and Eli Crews respectively. Beulah went on to record 2003's Yoko, then toured North America and Europe before a goodbye show on August 5th 2004, in New York.

A DVD, A Good Band is Easy to Kill was released in 2005 and features documentary footage from Beulah's 2003 tour.

The Coast Is Never Clear

When Your Heartstrings Break