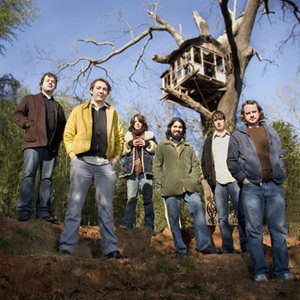 Hailing from Athens, Georgia, Elf Power are a band of the Elephant 6 collective. Their sound lies somewhere in between that of the upbeat pop rock of the Apples in Stereo, and the lo-fi tendencies of Neutral Milk Hotel or The Olivia Tremor Control. Formed in 1993, Elf Power released their debut LP "Vainly Clutching at Phantom Limbs" in 1995. Since then, they have released nine more LP's. The band members are Andrew Rieger (guitarist/vocalist), Laura Carter (keyboardist), Jimmy Hughes (guitarist), Derek Almstead (bassist), Eric Harris, Heather McIntosh (cellist), and Josh Lott (drummer).

Sunlight On The Moon

Back To The Web

The Winter Is Coming

A Dream In Sound

When The Red King Comes