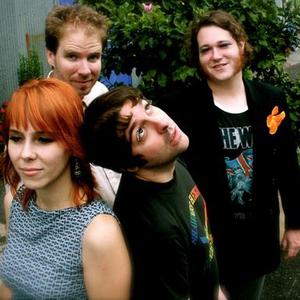 If you've never heard Casper & the Cookies, do yourself a favor; dismiss any preconceived notions. Forget that Jason played with of Montreal. Cast aside the reports of live shows replete with fake eyelashes, though it does look fantastic. You're going to have to take Casper & the Cookies on their own terms. Over the course of three albums Athens, GA's finest have managed to carve out an aesthetic of labyrinthine tangles of ear-worm melodies, plot-twist production, and the history of popular music.

After playing over 120 shows for 2006's The Optimist's Club (including two tours supporting the Apples in Stereo), the Cookies re-entered the studio. Starting with a few catchy nuggets for what was to be a studio recording of the band's live set, Modern Silence eventually took over a year to finish. They pooled resources from the evergreen Athens scene and beyond, calling in Bill Doss (Olivia Tremor Control) to assist and perform, and soliciting contributions from Robert Schneider (The Apples in Stereo), Vanessa Briscoe Hay (Pylon), music writer Gary ?Pig? Gold, Keith John Adams, a parrot named Rocky, and dozens more. During the gestation period the Cookies experienced two notable casualties: drummer Joe Rowe (who left to start his own band) and the Bacharach/David classic ?(They Long to Be) Close To You,? which they completely dis- and reassembled.

The band soldiered on for most of 2009 with an amplified iPod in place of a flesh and blood drummer until early 2010, when the throne was finally occupied by Gregory Sanders. A west coast tour with Aquaserge soon followed.