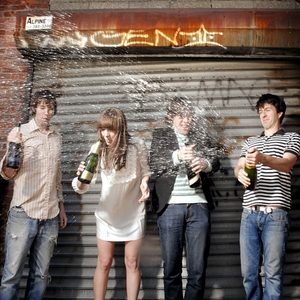 Bishop Allen is an American indie rock band which formed in Brooklyn, New York, United States in 2003. The band's core members are Justin Rice and Christian Rudder, who are supported both on stage and in the studio by a rotating cast of musicial collaborators. Currently the band consists of Justin Rice (vocals, guitar), Christian Rudder (guitar), Darbie Nowatka-Rice (keyboards, violin), Keith Poulson (bass) and Michael Tapper (drums). Tapper is a former member of the indie rock band We Are Scientists.

The band takes its name from Bishop Allen Drive in Cambridge, Massachusetts, where the two lived together after college and has released three albums, "Charm School" (2003), "The Broken String" (2007) and "Grrr..." (2009).

Charm School was Bishop Allen's first record. Recorded in fits and starts over two years, it grew song-by-song as Rice and Rudder wrote and played in their spare time. They recorded all the instruments on the album's 13 songs themselves, using drum loops to hide the fact that neither is a drummer, and almost everything on the record was recorded one track at a time in an ordinary bedroom. Backing vocals by Bonnie Schiff-Glenn and Kate Dollenmayer and supplementary drums by Coll Anderson, all added in the album's final stages, completed the songs.

In 2006, Bishop Allen recorded and released an EP every month of the year. Each record was titled for the month of its release (January, February, and so on), and, with the exception of August, which was a 14-song live disc, each contained four new studio songs.

In November 2006, Bishop Allen signed to Dead Oceans, a new sister label to Secretly Canadian and Jagjaguwar, for a modest advance. They began recording a new record that January, at Blackwatch Studios in Norman, Oklahoma, and delivered it two months later. This is Bishop Allen's first true studio recording and was released by Dead Oceans on July 24, 2007.