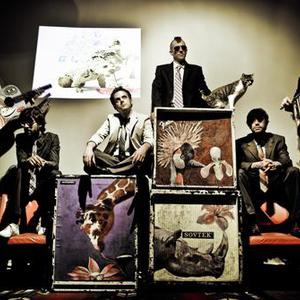 The drums smack you in the face first, like a hailstorm with no sign of letting up. Then, as waves of harmonies emerge unexpectedly, a joyous sensation sets in, as if someone just snapped you out of a fever dream. The beat-driven, orchestral-pop epics unfold like an audio scrapbook of memories from the life of Grandchildren songwriter Aleksander Martray. ?I was restless from a really young age,? explains Martray, the son of a high-ranking military officer, born on an Army base in Germany and raised on both sides of the Atlantic.

?I was restless from a really young age,? explains Martray, the son of a high-ranking military officer, born on an Army base in Germany and raised on both sides of the Atlantic. ?Growing up in flux between different places I gravitated towards more intangible things like stories, melodies, movies, and dreams, and so early on music became a way of making a home for myself.?

Grandchildren's debut album, Everlasting, feels like a culmination of all that restlessness. A sonic collage of the sentimental and the confrontational, the album is a safe haven for multiple realities? fusing tribal beats, frayed electronics, fireside folk melodies, richly-woven orchestral-pop flourishes and even field recordings from Martray's journeys across Central America, the Caribbean and Africa.

?The project began during my nomadic mid-20s. I was constantly split between Baltimore, Philadelphia, DC, and travels abroad. I think the music is a reflection of a young person processing their own coming of age through constant self-inflicted culture shock. The textures of the final album span time and space,? he says. ?And yet, it comes across as one seamless reality. You can feel the influences but you can't put your finger on them.?

During this time Martray's closest thing to home was a tiny third-floor bedroom in a dilapidated Victorian house in West Philadelphia known as Danger Danger. At the height of its illegal phase, this notorious DIY ?venue' hosted everything from IDM-infused metal (Genghis Tron) to frantic free-jazz (Marshall Allen of the Sun Ra Arkestra). These eclectic sounds billowed upstairs towards Martray's makeshift bedroom recording studio, taking what began as a solo experimentation in dizzying new directions.

?The songs evolved through the recording process,? explains Martray, ?they were so layered that when I went to play them live, so much had to be sampled. That's when I realized this wasn't a solo project. It's music for a small orchestra.?

With that in mind, Martray brought his fellow housemates?a motley crew of instrument-swapping misfits?into the fold one by one. This included drummer Roman Salcic, a Croatian transplant reared on American rock music; jack of all trades Tristan Palazzolo; math-thrash guitarist Adam Katz; bassist/percussionist Russell Brodie; and classical-pianist-turned-synth-slinger John Vogel. Over the course of one daunting year, the group developed Grandchildren's 10-song album into a live set that's as seamless and widescreen as the recordings.

?It looks spontaneous to people,? explains Katz, ?but everything's carefully choreographed on our end.?

A lot of that stems from a two-month North American tour in 2009, one that was plagued by chicken pox, blizzards, border patrols, and van break-ins. This not only brought them closer together; it gave Grandchildren the chance to perfect the ebb and flow of their live set.

?And now that everything's down to a science,? says Martray, ?the live performance is an art in and of itself. As full and layered as the sound has become, it rests on the backbone of those early bedroom recordings. Kind of like with a car, where you keep replacing parts until the whole thing is new. By the end you can't even remember what came from where. The process hides within the sound.?