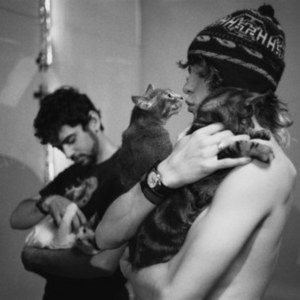 MGMT is a neo psychedelia/alternative rock group which formed in Middletown, Connecticut, United States in 2002. The band consists of Andrew VanWyngarden (vocals, guitar, keyboards, drums), Ben Goldwasser (keyboards, vocals, guitar), Matthew Asti (bass), James Richardson (guitar, vocals) and Will Berman (drums). Originally consisting only of VanWyngarden and Goldwasser, the other members were added to the band in 2008.

You can learn more about MGMT, browse photos, and see the tour schedule at the Official Website.

As You Move Through The World (CDS)

In The Afternoon (CDS)