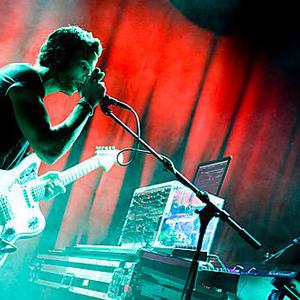 M83 is the electronic music project of the French artist Anthony Gonzalez. He and former member Nicolas Fromageau founded the group in 2001 in Antibes, France. M83's style owes a lot to the shoegaze genre, in that there is much emphasis on tonality, extensive use of reverb effects and often softly-spoken lyrics at times submerged in instrumentation. M83 was named after the spiral galaxy "Messier 83".

For the third album released by M83, Before the Dawn Heals Us, Gonzalez decided to part from Fromageau (after an emotionally distressing tour for Dead Cities). Currently Anthony Gonzalez records mainly on his own(Nicolas Fromageau started Team Ghost in 2009), often with the help of his brother Yann Gonzalez, vocalist/keyboardist Morgan Kibby, guitarist/bassist Pierre-Marie Maulini, and drummer Lo?c Maurin.

M83's song "Unrecorded" from Dead Cities, Red Seas & Lost Ghosts was used in the trailer for the American release of the Russian movie Night Watch, and the track "Teen Angst", taken from Before the Dawn Heals Us, appeared on the trailer for the film adaptation of Philip K. Dick's novel "A Scanner, Darkly", which was released in 2006.

M83 produced the remix of the track "Pioneers" on the British rock group Bloc Party's 2005 album Silent Alarm Remixed. M83 also collaborated with other Gooom Disques artists in a collaborative LP, under the name Purple Confusion.

Just after the Before the Dawn Heals Us US tour, Anthony Gonzalez decided to take M83 in a more ambient direction (as heard on some earlier M83 tracks) and started to write and record a collection of ambient works. The relevance of digital music (from creation to sharing), gave him the idea to call the project Digital Shades Vol. 1, and to make the album part of an ongoing series.

M83's 2008 album Saturdays = Youth, released on Mute, was recorded with the help of Ken Thomas and Ewan Pearson. Four singles were released from the album: "Couleurs" in February 2008, "Graveyard Girl" in April, "Kim & Jessie" in July, and "We Own the Sky" in December.

In December 2008, M83 supported Kings of Leon on its UK tour. In January and February 2009, M83 supported The Killers across USA tour dates and toured with Depeche Mode on its Tour of the Universe in Italy, Germany, and France.

The double album Hurry Up, We're Dreaming was released on 17th October 2011, through Na&iuml;ve, produced by Justin Meldal-Johnson (Beck, NIN, The Mars Volta, Goldfrapp) and including contributions from Zola Jesus, Brad Laner (from 90's band Medicine) on guitar, and the vocalist Morgan Kibby. The album was preceded by the track "Midnight City" released in July 2011. The Midnight City Songfacts reports that it became M83's first hit in the UK, helped by its selection as the theme to E4's reality TV show Made In Chelsea and its usage in a Victoria's Secret ad campaign as well as the BBC's London 2012 Olympic Games coverage.

You And The Night