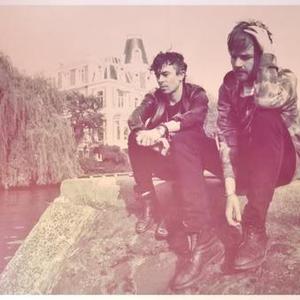 The Big Pink are an electro rock duo that formed in 2007 in London, England. The group consists of Robbie Furze (vocals, guitar) and Milo Cordell (keyboards, synths, vocals). The duo took their name from "Big Pink", a house in upstate New York where The Band and Bob Dylan made some legendary recordings. They are best known for their 2009 single "Dominos", which peaked at #27 on the UK Singles Chart and #36 on the Billboard Alternative Songs chart in the United States.

This London duo use gritty beats, droning guitars, abstract effects and dreamy vocals to create a soundscape that is arty yet tuneful. They have previously supported Muse, TV on the Radio, Florence + the Machine, Crystal Castles and Klaxons.

Milo Cordell is son of 1960s pop producer Denny and runs the Merok label, which has released cutting-edge dance acts Klaxons and Crystal Castles. Robbie Furze is a former guitarist with electro-punk singer Alec Empire and is also a founding member of the band Panic DHH.

Their first three singles were "Too Young To Love"/"Crystal Visions" (House Anxiety), "Velvet" and "Stop the World" (4AD). Their debut album A Brief History of Love was recorded at the Electric Ladyland Studios in New York and was released in the UK on the 14th of September 2009. The Big Pink supported Muse on the UK leg of The Resistance Tour.

Their second album Future This was released on 11 January 2012 on 4AD label.

A Brief History Of Love