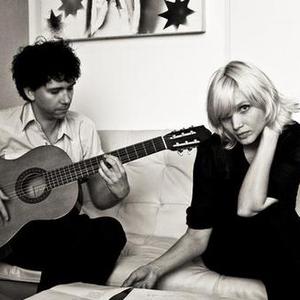 The Raveonettes are a rock and roll duo formed in Copenhagen, Denmark in 2001. Comprising Sune Rose Wagner (guitar, instruments, vocals) and Sharin Foo (guitar and vocals), their music is characterized by close two-part vocal harmony inspired by The Everly Brothers, coupled with hard-edged electric guitar overlaid with liberal doses of noise. The name, The Raveonettes, is a direct reference to The Ronettes, and Buddy Holly's song Rave On!.

The name, The Raveonettes, is a direct reference to The Ronettes, and Buddy Holly's song Rave On!.

Their songs juxtapose the structural and chordal simplicity of 50s and 60s rock with intense electric instrumentation, driving beats and often dark lyrical content, similar to another of the band's influences, The Velvet Underground. Altogether, they sound very much like a slightly more melodic version of The Jesus and Mary Chain.

On April 4th, 2011, they released "Raven in the Grave", a nine-track studio album with Vice Records. It's their 5th studio album.

From their site bio:
?I think we have finally hit on something quite important and different for this album,? explains Sune. ?This is the first Raveonettes album we've done which doesn't feature the signature Raveonettes surf drumbeat. None of the tunes have any real sunshine to them. It's all very un-Rave.?

?It has a mood of ethereal defiance? Sharin adds. ?It's dark but not bleak, like the single minded determination caused by crisis that is not quite hope but just as powerful. It's the perfect winter soundtrack just in time for spring?.

I Wanna Be Adored (CDS)

Into The Night (EP)

Raven in the Grave

In And Out Of Control

You Want The Candy (CDS)