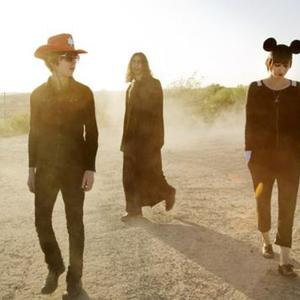 Karen O and Brian Chase first met as students at Oberlin College in Ohio in the late 90s, where Chase was a jazz student at the conservatory. Karen then transferred to New York University, and while in New York met Zinner in a local bar, where they formed an "instant connection". During this time they also shared a loft in Manhattan with future members of the band Metric.

The two formed an acoustic duo called Unitard, but they went electric after being inspired by Ohio's avant-punk scene. After the drummer they recruited initially bowed out, Chase joined the line-up and decided to form a punk band similar to the "trashy, punky, grimy" art student groups that Karen had left behind in Ohio. The newly band named Yeah Yeah Yeahs wrote a slew of songs at their first rehearsal and soon wound up supporting The Strokes and The White Stripes, earning a significant buzz for their arty and garage punk scene.

In 9 July 2001, the band released their debut EP Yeah Yeah Yeahs, which they recorded with Boss Hog's Jerry Teel, on their own Shifty label. In 5 November 2002, they released the second EP entitled Machine on Touch and Go label.

Fever To Tell was nominated for a Grammy for Best Alternative Music Album and was certified Gold in the UK. The New York Times chose Fever To Tell as the best album of the year. In June 2005, the album was ranked number 89 on Spin magazine's list of the 100 Greatest Albums, 1985?2005. It is also featured in the book "1001 Albums You Must Hear Before You Die". In 2009, the album was declared by Rolling Stone, Pitchfork Media, and NME, the 28th, 24th, and 5th best album of the decade, respectively.

In October 2004, the group issued the DVD, "Tell Me What Rockers to Swallow" which included a concert filmed at The Fillmore in San Francisco, all of the band's music videos to date, and various interviews. In 2005, Karen O collaborated with Kool Keith on the track "Teaser". For the movie "Jackass 2", she collaborated with Peaches and Johnny Knoxville to record a track entitled "Backass". Nick Zinner also plays in Head Wound City, a hardcore supergroup with members of the Blood Brothers and The Locust, and has toured with Bright Eyes for his album, Digital Ash in a Digital Urn. Brian Chase has an active side project in the form of his improvisational band, The Seconds.

Show Your Bones was named the second best album of the year by NME magazine, as well as "Cheated Hearts" being voted the 10th best song. Rolling Stone magazine named this album as being the 44th best album of 2006, while Spin magazine ranked it # 31 on their Top 40 Best Albums of 2006. The album was also nominated for a 2007 Grammy Award for "Best Alternative Music Album". In 2009 Show Your Bones ranked #32 on NME Top 100 Albums of the Decade.

In 24 July 2007, Yeah Yeah Yeahs released their third EP, titled Is Is EP. This EP includes 5 songs written in 2004 during the Fever to Tell tour, including the single "Down Boy". The band also made a live film to accompany the EP, recorded at the Glasslands Gallery in Brooklyn, NY.

In 2008 Karen O had begun working on a small side project called Native Korean Rock with fellow NYC musicians. On the collaboration-project N.A.S.A. The Spirit of Apollo, she appears on the track "Strange Enough", together with Ol' Dirty Bastard and Fatlip. In the same year, Nick Zinner and Karen O both appeared on the Tiny Masters Of Today album, Bang Bang Boom Cake. Karen also directed the video for their song "Hologram World".

The third full-length album It's Blitz! was released on Interscope on 9 March 2009 for the digital version and 31 March 2009 for the CD, with an 6 April 2009 release for the rest of the world. The album was produced by the band's long-term producer Dave Sitek, along with Nick Launay and it's notable for its mix of indie rock and electronic sound. Three singles were released from this album: "Zero" (24 February 2009; #49 UK, #18 US alternative chart), "Heads Will Roll" (29 June 2009), and "Skeletons" (1 February 2010). It's Blitz! was ranked as the third best album of the year 2009 by NME and second best by Spin. Both magazines also listed the song "Zero" as the best of the year.

Also in 2009, Karen O wrote and performed with Nick Zinner, Brian Chase, Bradford Cox of Deerhunter and Yeah Yeah Yeahs associate Imaad Wasif on the soundtrack of the Spike Jonze's film adaptation of "Where the Wild Things Are", credited as Karen O and the Kids. "Where the Wild Things Are OST" was nominated for the "Grammy Award for Best Song Written for a Motion Picture, Television or Other Visual Media", a songwriter's award, at the 2010 Grammy Awards.

Spitting Off The Edge Of The World (CDS)