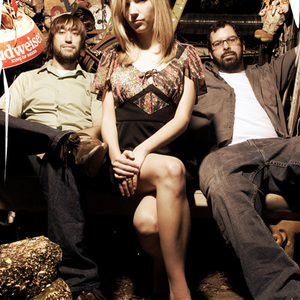 Ume (pronounced ooo-may) is an Austin trio who have built a reputation as one of indie rock's heaviest live bands. On their new EP, the power of Ume's live show has been captured and surpassed. With this sophomore release, Lauren Larson's ferocious guitar riffs and fiery vocals have combined with a melodic beauty that completely transcends their previous efforts. With a rock-solid rhythmic foundation provided by Eric Larson on bass and Jeff Barrera on drums, Ume has delivered a unique combination of catchy pop sweetness, delay-drenched noise, and jaw-dropping intensity

Behind Ume's explosive music is an unassuming and quite shy trio. Guitarist/vocalist Lauren says (in her southern drawl) that show after show she meets people who don't think she could possibly have played in punk rock bands for over a decade. She has even had audience members ask if the guitar parts were pre-recorded, because ?nobody could play guitar like that, wail, and flail around so much on stage.? Sorry folks, this pint-sized shredder is the real deal.

One of her first fans was bassist Eric Larson, who asked the then 15 year-old guitarist to go out after seeing her grind-core band perform on a skatepark vert ramp. While attending Houston-area DIY punk shows, the high-school couple met drummer Jeff Barrera. They ran into him a few years later at an Unwound concert and formed Ume in 2002. Shortly thereafter, Lauren moved with Eric to Pennsylvania to pursue a graduate degree in philosophy. Though only able to practice a few times a year, the band stayed together across 1,600 miles.

After seeing Ume live in Brooklyn, the NYC label Pretty Activity released their debut ?Urgent Sea? in 2005. The album was called ?about as good as it gets? by the Philadelphia Weekly.

The band rejoined in Austin in 2007 and recorded their latest Sunshower EP with Frenchie Smith (Trail of Dead, Dandy Warhols) at The Bubble in 2008. As evidenced on standout tracks ?The Conductor? and ?Pendulum,? this EP combines moments of melodic tenderness with epic hooks and some of the heaviest riffs you'll hear this year. The intensity takes an entirely different shape on the elegant piano-tinged ?Sunshower,? as the song's lush vocals and hypnotic rhythms highlight Ume's dynamic progression. These three tracks offer an exciting glimpse of what to expect from the band's upcoming full length, which they will begin recording this summer.

Building on the momentum of their busy 2007/08 schedule, which saw stops at both CMJ, SXSW, and Fun Fun Fun Fest, along with a leak of Sunshower landing on Gang of Four bassist Dave Allen's top ten list for 2008 (pampelmoose.com), and tracks from the EP getting spins on Seattle's KEXP, Portland's KNRK, and Austin's 101X, Ume is set to be one of the breakout acts of 2009.

Ume has shared the stage with such diverse bands as Arcade Fire, Marnie Stern, The Fall, Times New Viking, A Place to Bury Strangers, Oneida, Magnolia Electric Co., and Dead Confederate, and will be appearing at this year's SXSW.
www.myspace.com/umemusic
www.umemusic.com/sunshower/