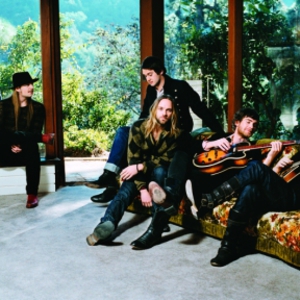 Carolina Liar is a pop rock band which formed in 2006. The band is led by Chad Wolf, who is originally from Charleston, South Carolina, but the band and most of its members originate from Sweden. The band currently consists of Wolf (vocals, guitar), Rickard G?ransson (guitar), Johan Carlsson (keyboards) and Peter Carlsson (drums). Songfacts.com states that after releasing their 2008 debut album Coming To Terms on Atlantic Records, Carolina Liar's sophomore set Wild Blessed Freedom was self-released through RED in 2011. "Drown " was the first single from the record.

The band is best known for the song "Show Me What I'm Looking For" off of its 2008 major label debut album Coming to Terms, produced by Swedish producers Martin "Max Martin" Sandberg & Johan Schuster.