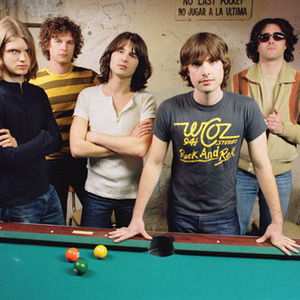 Rooney is a rock band which formed in Los Angeles, California, United States in 1999. The band consists of Robert Schwartzman (vocals, guitar), Louie Stephens (keyboards), Taylor Locke (guitar, vocals), Brandon Schwartzel (bass) and Ned Brower (drums). Schwartzman is the brother of actor and musician Jason Schwartzman. The band has released three albums - "Rooney" (2003), "Calling the World" (2007) and "Eureka" (2010) - and is named after Dean of Students Ed Rooney, from the movie Ferris Bueller's Day Off.

Their music is reminiscent of British Invasion rock and 1980s pop, and has been compared to The Beatles, The Cars, Jellyfish and Blur. They have toured the nation with acts such as Jonas Brothers, Kelly Clarkson, Weezer, The Strokes, Tally Hall, The All-American Rejects, and The Academy Is... Rooney's official website states that the band "manages to capture elements from the past four decades and make them sound modern today."

Early history
Rooney first formed as Ed Rooney back in 1999. The original line up consisted of Teddy Briggs on drums and Matt Star on guitar. Ned Brower replaced Briggs as drummer, Matt Star left, and Louie Stephens was added as keyboardist. They released a series of independent EPs called Deli Meats (2000), Plug It In (2001), and Mastedonia (2002).[1] Somehow, they accomplished all of this without ever signing to an Independent Label. The band played multiple shows a month around LA and Anaheim and built up a strong following. Schwartzman moved to NYC to attend the Eugene Lang College at the New School. Instead of writing papers, he spent his dorm room nights writing new Rooney songs. Schwartzman sent his latest material to his band mates in LA and flew home every month to perform. They recorded another demo cd with producers Keith Forsey and Brian Reeves. It consisted of the songs Popstars, If It Were Up To Me, and Losing All Control. The demo cd made its way around LA and created some buzz for the band at the major labels and management companies. Schwartzman decided to leave school and pursue the band full time. Rooney played a show at the Roxy in early 2002 packed with Rooney fans and A & R guys. Immediately after the show, the president of Geffen records approached the band. After meeting all interested parties, the band went to Interscope to meet with Jimmy Iovine. Jimmy loved the demo cd and said he would produce a couple of tracks himself if they signed with them. Based on their roster, Rooney signed the deal with Geffen/Interscope in 2002.

The band was interested in having Ric Ocasek produce the album. Ric got his hands on the demo cd and immediately contacted Schwartzman. They spent a lot of time talking about the songs and Ric wanted to use the demo songs on the album, he felt they were finished. Rooney flew out to NYC for a show with Phantom Planet at CBGB's. Schwartzman loved Ric's pink Jazzmaster, the one he used in the The Cars. Ric said he could use it for the show, but Schwartzman took it back to LA and held onto to it for quite a while. The label liked the idea of Ric producing the album, but since Ric loved the demos so much, everyone thought that Keith Forsey and Brian Reeves, who recorded the demos, should be given the opportunity.

Once the band and producers decided on the material and Taylor and Louie graduated from high school, they started recording at NRG studios in North Hollywood CA. Most of basic tracking was done at NRG. They moved to The Jungle Room in Burbank to finish the album.
The label wasn't happy with the way "I'm Shakin'" was sounding. The band tried it different ways, but it just wasn't right. Something had to change. So the band asked Jimmy, who had agreed to produce 2 tracks, to produce the song. Jimmy hired engineer Adam Kasper to run the session. They recorded at Village Studios in West Los Angeles. Tension was running high, and the session took over three weeks. Jimmy felt the song came out great and approved Andy Wallace to mix the album. Wallace allegedly broke down in tears when he was asked.

The band hit the road with Weezer shortly after they finished recording. Then their friends The Strokes asked Rooney to open for them on their fall headline tour in 2002. At the end of the year, still no album out, they sold out a show at the Palace Theater (now the Avalon) in Hollywood. The band was frustrated that the album wasn't released, but the label assured them it would be out the summer of 2003. The band toured with The Donnas and Ok Go, followed by a tour with Pete Yorn and Grandaddy. Finally the album was released May 20, 2003. The band hit the road on Lalapallooza 2003, its first year back as a national tour. The acts included The Namedroppers, Audio Slave, Queens Of The Stone Age, Jurassic Five, Incubus, The Donnas, and Jane's Addiction, and Rooney (on the main stage).
Blueside was the lead off single, which gained lots of radio play at Alternative radio. The band was over the moon when they heard their song on their home town radio station KROQ. The song was also featured in the video game Tiger Woods PGA Tour 2004..

Album sales were slow until in 2004 when they had a cameo appearance in an episode of The O.C., "The Third Wheel" where they sang the songs "Sorry Sorry", "I'm Shakin'", "Popstars" and "I'm a Terrible Person", the latter used in the commercial of Carolina Herrera's fragance CH, in 2007. Their song "Blueside" was featured on the Tiger Woods PGA Tour 2004 soundtrack and their song "I'm Shakin'" was featured on an episode of the daytime soap opera All My Children.
On November 16, 2004 the band issued their first DVD, Spit & Sweat. The hour long documentary features interviews with the band and live performances from Los Angeles. The DVD also includes the videos for "Blueside" and "I'm Shakin'."

Following their summer tour, the band began their third sessions for a second album. Only three songs from the previous sessions ("Don't Come Around Again," "Paralyzed," and "Tell Me Soon"), were kept for their new album, Calling the World. On March 6, 2007, the single "When Did Your Heart Go Missing?" was released on their official MySpace. The single also was used in commercials of the TV show Beauty and the Geek. It was also used in an episode of Newport Harbor: The Real Orange County, in the Gossip Girl season 1 episode "Wild Brunch". and in the movie Nancy Drew. The album was released to stores July 17, 2007 and debuted #42 on The Billboard Top 100 Albums chart.

Between the release of the first album and Calling the World, Rooney recorded, produced, and mastered two complete albums that were subsequently scrapped. Schwartzman has stated his desire to re-record these two albums for release in 2011.

Rooney was the opening act for the Jonas Brothers on the Look Me In The Eyes Tour from January 31, 2008 to March 22, 2008 for a total of 39 shows.
Rooney headed out on a headlining tour dubbed "The Calling the World Tour" in May 2008 in the United States, which was scheduled to run through August. The band said during live shows that they planned to record a new album upon after the tour ended.
Rooney have worked on the theme for the show Iron Man: Armored Adventures on the Nicktoons network. The song premiered online March 29, 2009, and the show launched April 24, 2009.

Rooney are now free agents, not attached to any record label. The new self-released album 'Wild One' was exclusively available only at live shows. The band started a winter tour with Tally Hall and Crash Kings on Friday November 27, 2009 in Los Angeles. The tour went through most of December. The band streamed several songs from the album on Myspace days before the official first day of the tour. The EP is now available for sale on Amazon's MP3 store and Apples iTunes Store

Rooney's third full-length album was released on June 8, 2010 through California Dreaming Records, Warner Music Group's Independent Label Group. The album features the lead single "I Can't Get Enough" and the final appearance of bassist, Matthew Winter. Rooney tours again nationally in Summer 2010, supporting Hanson for several weeks of their tour. These shows are interspersed with numerous shows where Rooney headlines, and the bands The Young Veins and Black Gold supporting.