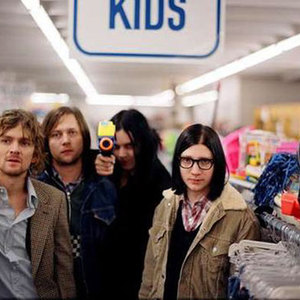 The Raconteurs are an alternative rock band, formed in Detroit, Michigan, United States, in 2005. The band consists of Jack White (vocals, guitar), Brendan Benson (vocals, guitar), Jack Lawrence (bass) and Patrick Keeler (drums). The band considers themselves to be a "new band made up of old friends" and the members are also members of other rock groups: White was a member of The White Stripes (and, along with Lawrence, is also a member of The Dead Weather), Benson is a solo singer/songwriter and Lawrence and Keeler are members of The Greenhornes.

The band has released two albums, 2006's "Broken Boy Soldiers" and 2008's Consolers of the Lonely.

Dean Fertita from The Waxwings did live keyboards for the band in 2006; he also played in Brendan Benson's band and is now touring with Queens Of The Stone Age, and is a member of White and Lawrence's band The Dead Weather.

The band had to change their name in Australia, since there already was a band named The Raconteurs there. The band is referred to as The Saboteurs in Australia.

Consolers Of The Lonely