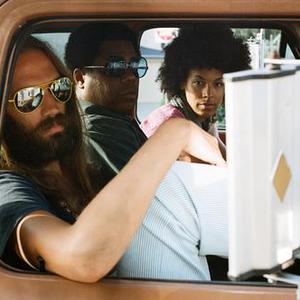 Earl Greyhound formed in 2002 with the collaboration of songwriters Matt Whyte and Kamara Thomas. Living and working in New York City, the pair began performing regularly as a duo. All along, they were crafting the sound and songs that would form the foundation for a colossal rock band influenced by the strident English three- and four-pieces of the 70's, the dark pop and heavy grooves of the 90's, and the transcendental, noisy acid sounds of modern rock.

The band's first full-length album, Soft Targets, was recorded in Los Angeles and Brooklyn in 2005. However, they were loathe to release the album without a permanent drummer?tellingly, a constant snag since EG's inception. Taking a leap of faith, Matt and Kamara vowed to play a gig every week until their dream drummer found them. One fateful evening, a gig at Brooklyn's Southpaw brought them a friend in guitar player Kirk Douglass (of The Roots). Douglass became a fan and brought his friend and Gold Crowns bandmate Ricc Sheridan to gigs for the next few weeks. Ricc says, ?I awoke from a dream one night, and knew that this was my band.? A rockneck-inducing jam confirmed that the band had found its holiest trinity. They hit the ground running with Big Ricc Sheridan on drums, and the world has been rocking their faces ever since!

Released in October 2006, Soft Targets earned loads of fans and critical acclaim from publications including The New Yorker, SPIN, Rolling Stone, Brooklyn Vegan and Pitchfork. Even more so, the band's live show quickly drew heaps of attention and gained a steady reputation among critics and fans alike as a veritable rock-n-roll wrecking ball. Earl Greyhound toured relentlessly for the next two years all over the US, Canada and Japan, and autumn 2007 was spent playing theatres as openers for the band's good friend Shooter Jennings as well as Soundgarden and Audioslave's Chris Cornell.