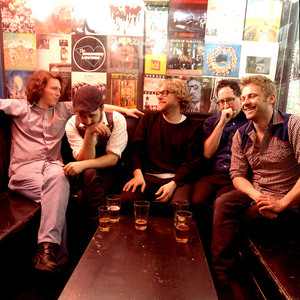 The Hold Steady is a Brooklyn-based rock band formed by vocalist/guitarist Craig Finn (ex-Lifter Puller) in 2004. Wanting to capture the sound of bands such as The Replacements and The Grifters, he recruited guitarist Tad Kubler (also ex-Lifter Puller), drummer Judd Counsell, and bassist Galen Polivka. In 2005 the band grew to include Franz Nicolay (of The World/Inferno Friendship Society) on keyboards and Bobby Drake took over on drums following Counsell's departure.

Recording mostly live, the band released its debut, Almost Killed Me, on French Kiss Records in March 2004 and Separation Sunday a year later. In April 2006 the band signed to Vagrant Records and entered the studio on the 1st of May to begin work on their third record, Boys And Girls In America. Released in October, it was one of the most critically acclaimed records of 2006 and reached a much larger audience than its predecessors.

Thrashing Thru The Passion