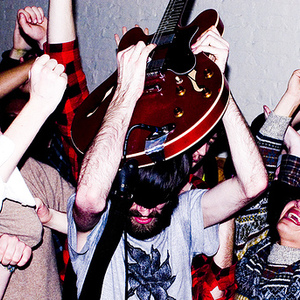 Titus Andronicus is a punk rock/indie rock band which formed in Glen Rock, New Jersey, United States in 2005. They consist of Patrick Stickles (vocals, guitar), Julian Veronesi (bass), Liam Betson (guitar) and Eric Harm (drums). The band takes its name from the Shakespeare play Titus Andronicus. Titus Andronicus is known for their energetic punk/indie sound (tinted with hints of New Jersey rock and early rock 'n' roll) and their use of lo-fi production.

Their debut album, The Airing Of Grievances, was released on the Troubleman Unlimited record label on April 14, 2008 to many positive reviews. The album's loud, heavily distorted guitars are influenced by shoegaze, while the lyrics and song titles are references to various books and other forms of entertainment (such as the album title, from the Seinfeld episode, "The Strike", about Festivus). The Airing Of Grievances was reissued on January 20, 2009 on XL Recordings.

The band's second album, The Monitor, was released on March 9, 2010 through XL Recordings to wide critical acclaim, and was cited as one of the best indie albums of the year.

The band has a sizable list of former members, the latest of which, Amy Klein, left the band on October 24, 2011.

The Will to Live

The Most Lamentable Tragedy

My Time Outside The Womb

The Airing Of Grievances