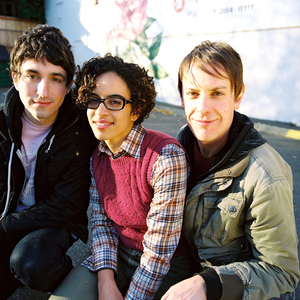 The Thermals are a rock band from Portland, Oregon, United States, formed in 2002. The group is currently comprised of Hutch Harris (vocals and guitar), Kathy Foster (bass), and Westin Glass (drums). Original guitarist Ben Barnett, of Kind of Like Spitting fame, left shortly after More Parts Per Million was released in 2003, reverting guitar duties back to Hutch. Drummer Lorin Coleman joined the group in 2006, after the original drummer, Jordan Hudson, left the band. Coleman and the band parted ways in 2008.

Hutch and Kathy finished writing for the album, Now We Can See, which was released on April 7, 2009. It was produced by John Congleton.

In November 2008, it was announced that The Thermals had signed to Kill Rock Stars, and that Westin Glass (formerly of Say Hi) had become the new drummer.

Now We Can See

The Body, The Blood, The Machine