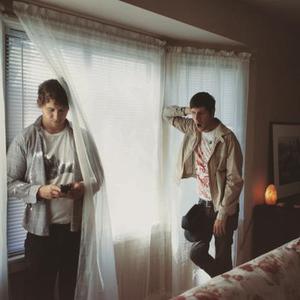 No Age is an American indie rock duo from Los Angeles, California formed in December, 2005. The band consists of Randy Randall (guitar) and Dean Spunt (vocals, drums). Formed from the ashes of Wives, No Age purvey a stripped essential take on pop delivered via a clearly defined punk-rock aesthetic, taking noise, energy and melody in equal measure. Reminiscent at various junctures of the likes of early Black Dice, The Ramones, and My Bloody Valentine, Weirdo Rippers documents a fast developing band hitting their stride.

Harnessing an explosive dynamic tension, No Age's music is prone to switch from syncopated punk-rock squalls to melodic, transient flashes of colour. Conversely, a pop song might spontaneously cut through the noise. On some basic level, No Age are their own band, full of their own conviction, and following their own trajectory.

Since their first performance at LA's the smell in April 2006, the band have continued Wives' tradition of incendiary live shows, playing as frequently as possible, expounding a visceral energy on an equal footing with their recorded output, via guitar, drums, vocals and a minimal amount of effects. No Age's music is deceptively simple in its construction, yet thoroughly compelling. Raw, considered and skilfully arranged, these eleven tracks are overflowing with ideas, ambition and intent. Both Randy and Dean are also involved at The Smell in a curatorial, social, and artistic sense. The Smell is an all ages space dedicated to underground music and art. Citing The Smell as seminal and inspirational to many, and at least partially responsible for the existence of both their bands to date, it's a mutually supportive grass roots space reflecting No Age's DIY ethic. It is this building that features on the front cover of their debut album for FatCat, ?Weirdo Rippers'. The band also make video, performance and visual art under the name No Age and by themselves, and curated the ?Get Hurt' exhibition in LA, featuring works by Devendra Banhart, Rich Jacobs, Ron Rege Jr., Matthew Thurber, Susan CianCiolo, and Ashley Macomber to name a few.

They have released three albums to date, 2007's "Weirdo Rippers" (a compilation of early material). The band released five limited vinyl-only releases on a variety of DIY indie labels across the globe on the same day. Weirdo Rippers is a collection of highlights for these releases. Despite its multiple sources, the tracklisting for Weirdo Rippers follows a narrative of its own, cohering effectively as an album. In mid-2008, the band released the single "Eraser", which has since become the band's best known song. This was followed by "Nouns" their second release in 2008 titled Nouns, on Sub Pop. The album was rated 9.2 (out of 10) by Pitchfork Media. In 2009 they put out their second Sub Pop release, an EP of loop and sample-based songs called Losing Feeling, a continuation of their punk-filtered pop songs with a few straightforward songs and a few more abstract compositions that harken back to their early EPs. The third release was 2010's "Everything In Between".